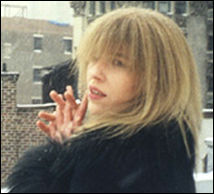 Karen Mantler (born 1966) is an American jazz musician, harmonica player, singer and composer. She is the daughter of Carla Bley and Michael Mantler.

Mantler appeared on the album Escalator Over the Hill as a child, which featured both her parents. She learned glockenspiel and was a member of her mother's band from 1977 to 1980. She studied organ and piano at the Berklee College of Music. In 1987 she formed her own ensemble for recording; she has released several discs of material, including two on ECM, since then. She toured Europe with her own band twice, and played at the Montreal International Jazz Festival. As the organist of the Carla Bley Big Band, she toured Europe again in 1992. Mantler also composed and played on several songs for the Robert Wyatt album "Cuckooland" in 2003. The titles of Karen's compositions are "Beware", "Mister E" and "Life Is Sheep".

Memories of Yesterday Othella Dallas
Update Required To play the media you will need to either update your browser to a recent version or update your Flash plugin.