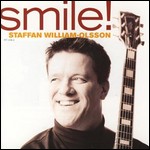 Staffan William-Olsson (born 13 December 1959 in Gothenburg, Sweden) is a Swedish Jazz musician (guitar) and composer, known guitarist of The Real Thing, and the collaborations with the likes of Bob Berg, Lee Konitz and Palle Mikkelborg.[1][2]

He played piano, guitar and drums already at the age of 7, and studied classical piano with a jazz-oriented teacher. Eventually he was oriented towards the guitar, with the blues and rock music as main sources of influence (Jimi Hendrix, Deep Purple and Led Zeppelin as main models).

When he discovered jazz-rock, Weather Report, John McLaughlin and Allan Holdsworth among others became the new sources of inspiration. George Benson's record Bad Benson was a turning point, it opened up his ears for the clean, undistorted guitar sound, and guitarists like Pat Martino was a great influence.

William-Olsson was after classical piano studies at Göteborg Musikhögskola (he is autodidact guitarist), the replasement for Ulf Wakenius in the Swedish fusion band Hawk on Flight, and also collaboraterd with such as Bob Berg, Lee Konitz and Palle Mikkelborg.[1]

He moved to Oslo in 1986 and worked as a freelance guitarist before becoming a part of the hard rock band Sons of Angels in 1989. The band signed a recording contract with Atlantic Records, and toured the east coast of USA and Europe. The album sold 100,000 copies, and the band broke up.[3]

Within The Real Thing