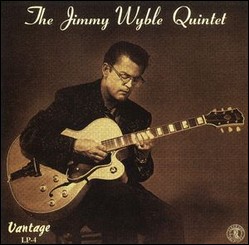 James Otis Wyble (January 25, 1922 January 16, 2010[1]) was an American guitarist, noted for his contributions to both jazz and Western swing. He was born in Port Arthur, Texas and died in Los Angeles, California.

Wyble played country music in the early 1940s with fellow guitarist Cameron Hill on local Houston radio. He was playing in Foreman Phillips's band when Bob Wills hired him and Hill to play in his group, the Texas Playboys. He served in the Army from 1942 to 1946, and returned to work with Western swing groups into the 1950s.

In 1953, he released his first record as a bandleader, The Jimmy Wyble Quintet. The album featured accordion, clarinet, guitar, bass, and drums. That same year, he recorded with Barney Kessel. Soon after he played in the bands of Benny Goodman and Red Norvo; he spent eight years touring and recording with Norvo, including a tour of Australia backing Frank Sinatra.

Wyble's output decreased in the 1960s and 1970s, playing mainly as a session musician in Los Angeles. In 1977 he recorded an album entitled Jimmy Wyble & Love Brothers, which featured neither a musician nor an ensemble called "Love Brothers". During this time Wyble played on TV shows such as The Flip Wilson Show and Kraft Music Hall, and studied classical guitar with Laurindo Almeida. Wyble also became a revered and highly sought-out teacher; among his students were Howard Roberts, Steve Lukather, Howard Alden, Larry Koonse and Smokey Hormel. Wyble played guitar on movie soundtracks, including The Wild Bunch, Ocean's Eleven, Woody Allen's "Everything You Wanted to Know About Sex", and Kings Go Forth. In the 1970s he also developed a unique and personal two-line contrapuntal approach to guitar, and composed numerous etudes in this style. Many of these pieces were published in various book, including "Classical/Country"(Howard Roberts-Playback 1973), "The Art of Two-Line Improvisation(PMP 1979), and "Concepts for the Classical and Jazz Guitar"(Mel Bay 2000).

Purple Deluxe Sléndro
Update Required To play the media you will need to either update your browser to a recent version or update your Flash plugin.