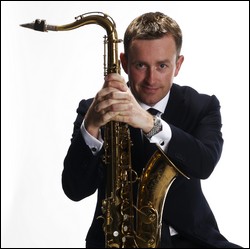 Tommy Smith (born 27 April 1967 in Edinburgh, Scotland) is a jazz saxophonist, composer and educator. The jazz critic Richard Cook said of him, "Of the generation which emerged in the mid-80s, he might be the most outstandingly talented".[1]

Thomas William Ellis Smith was born in Edinburgh on April 27, 1967, to a Scottish mother, Brenda Ann Urquhart, and father, William John Ellis, whom he never met. Smith was brought up in the Wester Hailes area of the city, where he was encouraged by his stepfather, George Smith, an avid jazz fan and drummer in the Gene Krupa style, to take up the tenor saxophone at the age of twelve.[2]

Under clarinetist Jim OMalley and pianist Jean Allison of the music department at Wester Hailes Education Centre, Smith was soon gigging around Edinburgh and Scotland with his quartet with John Rae. In 1983, aged sixteen, Smith recorded his first album, Giant Strides, with a trio featuring drummer John Rae; and that same year he won a scholarship, assisted by a fund-raising programme organised by his music teacher, Jean Allison, to attend Berklee College of Music in Boston,[3] where he formed the co-operative group "Forward Motion" with Norwegian bassist Terje Gewelt, Canadian drummer Ian Froman and Hungarian pianist Laszlo Gardony. This group recorded two albums, Progressions and The Berklee Tapes.

At eighteen and on the recommendation of Chick Corea, Smith joined Berklee vice president Gary Burtons group, alongside bassist Steve Swallow, pianist Makoto Ozone and drummer Adam Nussbaum, touring the world, recording the Whiz Kids album for (ECM Records) and catching the attention of critics, including Larry Kart of the Chicago Tribune, who opined: "The key addition is Tommy Smith, who, if memory serves, is only the second saxophonist Gary Burton has employed in his twenty-odd years as a leader. Smiths angular, bristling lines suggest he has his own story to tell."[4]

Smith recorded and toured with Hue & Cry, led by brothers Pat and Greg Kane, the American vibist Joe Locke, percussionist Trilok Gurtu and bassist Arild Andersen, among many others. In addition to his jazz-based commitments at this point, Smith also examined classical composition, leading to his first saxophone concerto, "Unirsi In Matrimonio", and a suite for saxophone and strings, "Un Ecossais A Paris".

Out Of The Blue

In 1993, Smith joined Scottish label Linn Records. His albums, Reminiscence (1993), Misty Morning and No Time (1994), Azure (1995, with Jon Christensen, Lars Danielsson and Kenny Wheeler), and Beasts of Scotland (1996) all received critical as well as audience acclaim. Writing in Playboy magazine, Neil Tesser noted of Beasts of Scotland that: "Smiths artful writing makes the ensemble sound like a petite Philharmonic."[5] Reviewer Chris J Walker, in the Los Angeles Jazz magazine, remarked that "Smiths strong compositional talent vividly conveys the aura of the various wildlife that his compositions are named for."

The Sound of Love followed. Recorded in New York in September 1997 with Kenny Barron (piano), Peter Washington (bass), and Billy Drummond (drums), it focused on the Duke Ellington-Billy Strayhorn songbook. The album reached number 20 in the American Gavin Jazz Chart.

Released in 1998, Gymnopedie: The Classical Side of Tommy Smith, was recorded with his regular duo partner, classical pianist Murray McLachlan. The disc featured music by Satie, Bartok, Grieg and Chick Corea, and Smiths Sonatas No. 1 "Hall of Mirrors" and No. 2 "Dreaming With Open Eyes", based on Michael Tucker's book of the same title.

Returning to jazz and to New York the following year, Smith then recorded his final album for Linn, Blue Smith, with guitarist John Scofield and his regular rhythm team, bassist James Genus and drummer Clarence Penn.

Having premiered his 3rd Saxophone Concerto with the Orchestra of St. John Smiths Square at Chelmsford Cathedral in May 1998, Smith went on to produce singer Jeff Leytons debut album with the City of London Philharmonic. Leyton, who is Smiths uncle, also sang on Monte Cristo, the saxophonists commission for the combined forces of the Paragon Ensemble and his own Sextet, with text by Edwin Morgan. It was first performed at the Traverse Theatre, Edinburgh, in September 1998.

Smith wrote the music for a play, Kill the Old, Torture the Young, which was also produced at the Traverse Theatre in Edinburgh. He also contributed tenor and soprano saxophone excerpts respectively to the movies Complicity and The Talented Mr Ripley, and premiered another large-scale composition, Sons and Daughters of Alba, incorporating Scottish folk music and musicians as well as text by Edwin Morgan, at the Glasgow International Jazz Festival in July 2000.

In September 2000, determined to take full control of his recorded output, Smith established his own recording company, Spartacus Records. The first album on the new label, also called Spartacus, was released in February 2001, featuring Smith alongside American musicians: pianist Kenny Barron, bassist James Genus and drummer Clarence Penn. That was followed by Smiths solo recording, Into Silence, recorded in Hamilton Mausoleum on October 30, 2001, and by a recording by Smiths quartet of ten specially arranged Christmas songs.

Smith continues to maintain a hectic work schedule. In recent years he has toured his own group to India, Pakistan, Sri Lanka, France, America, Turkey, Switzerland, Azerbaijan, Malta, Bratislava, Russia, Yemen and Romania, as well as the UK.

In April 2001, he was invited to take part in televised concerts in Switzerland alongside Benny Golson, Vincent Herring, Carl Allen, Buster Williams, Victor Lewis, Buster Cooper, and Randy Brecker. Then, in July that year, he premiered his extended composition, Beauty and the Beast, written for saxophonist David Liebman and the Scottish National Jazz Orchestra, and toured in a quintet with Liebman. This was immediately followed by his appearance as solo saxophonist in Sally Beamishs The Knotgrass Elegy, which was commissioned by the BBC Proms and performed at the Royal Albert Hall in London.

Other classical music endeavours have included his largest known work for the Edinburgh Youth Orchestras 40th anniversary. Written for saxophone, bass and drums plus a one hundred-strong symphony orchestra and entitled Edinburgh, this was premiered on April 12, 2003 in the Usher Hall, Edinburgh before touring Latvia, Estonia, Russia and Finland.

Recognising that Scotland was producing an outstanding crop of young jazz musicians, Smith formed the Tommy Smith Youth Jazz Orchestra in 2002, financing rehearsals and travelling expenses for teenage players from across the country out of his own pocket. The orchestra has performed at jazz festivals throughout Scotland and launched its first CD, Exploration, in Toronto, Canada in 2008.

In 2005, Smith reunited with Joe Locke, recording the album Dear Life (Sirocco) and touring extensively with the vibists group. In the same year, Smith formed a duo with another long-time colleague, Norwegian bassist Arild Andersen; with the addition of drummer Paolo Vinaccia, this has since developed into one of Europes leading jazz trios, with a busy concert itinerary and a debut album, Live at Belleville (released on ECM Records in 2008), which received innumerable album of the year nominations in the press worldwide.

As well as two duo albums, Smiths partnership with pianist Brian Kellock resulted in Smith creating an expanded jazz arrangement of George Gershwins Rhapsody in Blue for the Scottish National Jazz Orchestra, with Kellock as the featured soloist at the Edinburgh Jazz Festival on Friday July 28, 2006, a recording of which was released in May 2009. Another saxophone and piano pairing, with Swede Jacob Karlzon, has featured at jazz festivals in Edinburgh, Islay and Fife.

In addition, SNJO has performed music by contemporary jazz creators. These include Kenny Wheelers Sweet Sister Suite; Joe Lovanos Celebrating Sinatra, with arrangements by Manny Albam; a programme of the music of Maria Schneider, conducted by the composer; and Smiths own Planet Wave, an adventurous large-scale composition made possible by the Arts Foundation/Barclays Bank jazz composition fellowship prize which marries Smiths music to poet Edwin Morgans text. The concerts with Joe Lovano also featured the premiere of Smiths Torah, a work based on the first five books of the Bible, in which a titanic struggle occurs between good and evil. Written over seventy days, the fifty-minute composition was created specially for Lovano and SNJO. The same evening Torah was being premiered in Scotland, Dame Cleo Laine and John Dankworth premiered another work by Smith and Edwin Morgan, The Morning of the Imminent, at The Kennedy Center in Washington, DC.

SNJO has also provided a platform for jazz musicians and composers based in Scotland to write for big band in concerts devoted to suites comprising contributions by orchestra members and external contributors alike. These include The Solar Suite, Great Scots Suite and The Edinburgh Suite.

The Tommy Smith Youth Jazz Orchestra was established in June 2002. Smith's work in jazz education began while working for Gary Burton in 1986 when the group had to present masterclasses to international students all over the world; this kind of work continued with Smith's own groups until 1990, when he started teaching at Broughton High School in Edinburgh with John Rae, Brian Kellock and Kenny Ellis. In 1993 he began teaching improvisation at Napier University. In 1995 he created the curriculum for the National Jazz Institute in Glasgow which he directed until 1998. Smith has given masterclasses all over Europe, Americas and Asia. His students include Steve Hamilton, Stuart Gorman, Graeme Scott, Theo Forrest, Paul Booth, Konrad Wisznieski, Tom MacNiven, Allon Beauvoisin, Paul Towndrow, Fraser Campbell, Alan Benzie, Joe Wright, Peter Johnstone and Jo Fooks. In 2009 he became Artistic Director of a new conservatoire-level course in jazz at the Royal Conservatoire of Scotland in Glasgow.[6] The event was broadcast live by BBC News. The presentation lines were:

Now's The Time Voice It
Update Required To play the media you will need to either update your browser to a recent version or update your Flash plugin.