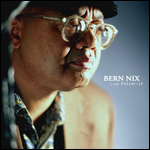 Bern Nix is an American jazz guitarist. He has recorded and performed with Ornette Coleman from 1975 to 1987, notably playing alongside fellow guitarist Charlie Ellerbee in Coleman's Prime Time group on their key recordings including Dancing in Your Head and In All Languages in 1987.

A native of Toledo, Ohio, Nix taught guitar upon his arrival to New York City. He is a graduate of the Berklee College of Music and currently resides in New York, New York.

Stop And Go Organic Quartett
Update Required To play the media you will need to either update your browser to a recent version or update your Flash plugin.