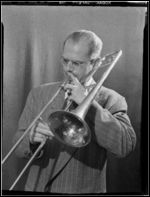 Early in his career, Harris performed with Benny Goodman, Charlie Barnet, and Eddie Condon. He is renowned for his broad, thick tone and quick vibrato that remained for the duration of each tone. He went on to join Woody Herman's First Herd in 1944. He was also in the Four Brothers Second Herd during the late 1940s, and he worked with Herman again in the 1950s. He then teamed up with Charlie Ventura and later with Chubby Jackson. Together with Flip Phillips, he became a stalwart of Benny Goodman's group in 1959, although it has been said that Goodman was frequently irritated at Harris because of Harris' indifferent approach to "sight-reading," the skill of playing off of written music with fluency, an ability notable in Goodman and trumpeter Harry James. As an improviser, Harris seemed comfortable playing among divergent stylists, as shown on "Jazz at the Philharmonic" recordings, as his "one-off" style seemed to work in any context, from "Dixieland" to swing to "bebop" .

Song For Dad Belmondo Quintet
Update Required To play the media you will need to either update your browser to a recent version or update your Flash plugin.