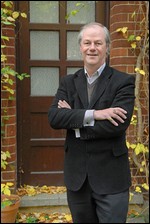 Corp was born and grew up in Wells, Somerset, later studying music at Oxford University. He was appointed Officer of the Order of the British Empire (OBE) in the 2012 New Year Honours for services to music.[1]

Corp attended the Southern Theological Education and Training Scheme to prepare for the priesthood. He was ordained in the Church of England as a deacon in 1998 and a priest in 1999. From 1998 to 2002, he served as a non-stipendiary minister (NSM) of St Mary's Church, Kilburn, London. From 2002 to 2007, he served as a NSM at St Mary's Church, Hendon. Since 2007, he has served as a NSM at the Church of St Alban the Martyr, Holborn.[2] All three parishes in which he has served, are in the Anglo-Catholic tradition. He is a member of the Society of the Holy Cross (SSC), a society of male Anglo-Catholic priests who follow a Rule of Life and hold traditional views towards biblical interpretation. For example, they reject the ordination of women into the priesthood.[3]

When Ronald Corp founded the New London Orchestra in 1988, his conducting career was launched: engagements have included concerts and recordings with many orchestras including the Royal Liverpool Philharmonic Orchestra, Bournemouth Symphony Orchestra, BBC Concert Orchestra, Ulster Orchestra and Royal Scottish National Orchestra, as well as appearing at the BBC Proms.[4]

Through his role as conductor and Artistic Director, Corp programmes and aims to bring to life repertoire written in the late nineteenth and twentieth centuries which is rarely heard in concert. His introductions from the stage are a key part of his mission to make music more accessible. Together with the New London Orchestra, his championing of neglected music has resulted in some 20 recordings with Hyperion Records which feature composers such as Milhaud, Satie, Elinor Remick Warren, Virgil Thomson, John Foulds and the Polish composer Grażyna Bacewicz;[5] and a series of Light Music Classics, four of them of British, and one each of American Light Music Classics and European Light Music Classics.

The issue in late 2010 by Corp and the NLO of the first digital recording of Rutland Boughton's opera The Queen of Cornwall was designated 'Disc of The Month' in Opera magazine, March 2011[6][7] and 'Editor's Choice' in Gramophone, September 2011.[8]

The New London Children's Choir was launched by Ronald Corp in 1991 with the aim of introducing children to the challenges and fun of singing and performing all types of music. The Choir is one of the busiest and most successful children's ensembles in the country and has commissioned more than 40 new pieces and premiered numerous other works by composers including its patrons Louis Andriessen and Michael Nyman. It has performed frequently at the Proms, made a number of film soundtrack and TV recordings, including the soundtrack to Star Wars Episode 1, 'The Phantom Menace' and been engaged for concerts and recordings with all the major London orchestras and opera companies. The choir and its members have appeared regularly in major London concert halls working with orchestras such as the London Philharmonic Orchestra, and sing onstage at the English National Opera.

Corp began writing music at a very early age. Learning the piano gave him a means of hearing and notating the pieces. He wrote throughout his teens and his undergraduate days at Oxford.

The list of his compositions is extensive and dominated by works for voice, whether solo, for small vocal groupings, church choirs or massive choral societies – Highgate Choral Society and the London Chorus have been regular performers over the years. His first major choral work And All the Trumpets Sounded was premiered in 1989 by Highgate Choral Society, the composer stating, "My piece focuses on war, the dead and the trumpets of the last judgement".[9] Five years later, and combining text from the Te Deum with Wordsworth and Hopkins, the cantata Laudamus was premiered to great critical acclaim[10] at St John's, Smith Square by the London Choral Society (now the London Chorus). In 2003 BBC Radio 3 commissioned a major work for the BBC Singers – an a cappella setting of Matthew Arnold's Dover Beach.

Following his work with youth choruses and the formation of the New London Children's Choir, Corp also established himself as a composer for young voices. On the strength of this reputation, he was commissioned to write for the Farnham Youth Choir who were winners of their section in the 'Sainsbury Choir of the Year' (1998), resulting in Four Elizabethan Lyrics to texts by Shakespeare, Dekker, Jonson and Chidiock Tichborne. Other substantial works for children's choir include Cornucopia, a cycle of songs with orchestra (1997), and its successor Kaleidoscope (2002) which includes a setting of 'The Owl and the Pussycat'. His Christmas opera Wenceslas was premiered by the New London Children's Choir in 1982 and revived in 2008, while a more recent children's opera, The Ice Mountain, had three performances in 2010–11 by the same choir, and has been recorded.

His interest in literature is evident in the many song-sets devoted to settings of a single poet, e.g. The Music of Francis Thompson which received its première at Benslow Music Trust in January 2010.[11] An earlier set, The Music of Whitman, had its première at the 2011 Tardebigge English Song Festival in Worcestershire, performed by Mark Stone (baritone) and Stephen Barlow (piano);[12] while The Music of Browning was first performed in October of the same year as part of the Little Venice Music Festival with Robert Presley (baritone) and Andrew Robinson (piano).[13] In March 2013, the baritone Lee Tsang premiered The Music of Larkin at Middleton Hall in Hull, Yorkshire. There are also discrete songs such as the humorous The Bath, and song-cycles such as Flower of Cities which takes London as its unifying theme.

Among his orchestral works are Symphony No. 1 (2009) which evokes "a journey from darkness to light"[14] and the programmatic triptych Guernsey Postcards (2004) with its depictions of a local fair, Pembroke Bay and St. Peter Port, commissioned by the Guernsey Camerata.

Another large-scale work is the Piano Concerto No.1 (1997) which has received three performances by pianists Julian Evans and Leon McCawley and was described by one critic as,

"... possibly the most winningly successful British Piano Concerto of the last forty years or so. It is, wholly exceptionally, very well written in true virtuoso pianistic style."[15]

The String Quartet No.1 'The Bustard' was premiered at the Wigmore Hall by the Maggini Quartet in 2008.[16]

On Saturday 9 July 2011, Corp celebrated his 60th birthday year at the Royal Festival Hall in London with a performance of And All the Trumpets Sounded and the world première of The Wayfarer (In Homage to Mahler) for 16 solo singers and orchestra – a setting of two of Mahler's own poems from his Lieder eines fahrenden Gesellen and of his early poem 'Im Lenz'. Ronald Corp conducted the NLO, and the combined forces of Highgate Choral Society, The London Chorus and the New London Children's Choir were deployed in the rest of the concert. A pre-concert talk took place with Corp in conversation with Richard Morrison.[17]

On 23 November 2011 a new anthem Laudate Dominum was performed at the Festival of St. Cecilia Service at Westminster Cathedral. This had been specially commissioned by the Musicians Benevolent Fund and was sung by the combined choirs of Westminster Cathedral, Westminster Abbey and St. Paul's Cathedral under Martin Baker.[18]

The Queen's Diamond Jubilee was celebrated by a special concert given at the Barbican by Highgate Choral Society and the NLO on Saturday 9 June 2012, to include the première of This Sceptr'd Isle by Corp, a stirring seven-minute setting of text from Shakespeare's Richard II, the orchestra replete with surging sea-imagery and fanfares for four trumpets.[19]

Corp's orchestrations of Erik Satie's Gnossiennes are featured in the film Chocolat of 2000.

More detailed information on Corp's life as a composer can be found on the Ronald Corp website.

An interest in Buddhist literature is reflected in his setting of parts of the Dhammapada (2010) for eight solo singers (or SATB choir) interspersed with recordings of bells at temples sacred to the Buddha; and the cycle Songs of the Elder Sisters (from the Therigatha) for mezzo-soprano, baritone, alto flute, clarinet and viola. The latter was recorded in February 2012 with Sarah Castle (mezzo-soprano) and Sam Evans (baritone) while Dhammapada had been recorded and released by Stone Records in 2011.

Andrew Stewart writes: "How does the composer respond to those who question why a Christian minister was drawn to set a fundamental Buddhist text? Dhammapada, he says, was created to open dialogue among faiths: 'It’s about inviting people to open their ears and minds to spirituality. These words, thought to be by the Buddha himself, tell us essential truths, which stand against cynical and untrusting ways of seeing the world and our place in it.' Dhammapada contemplates the corrupting force of material things and the transience of wealth, beauty and power."[20]

The music critic Michael Church reviewed the recording thus: "...Set for small choir, it becomes a beguiling work, full of scrunchy dissonances but graceful to the ear", designating it 'Album of the Week' in The Independent, 29 January 2011.[21]

Also recorded in May 2012 were the String Quartet No. 3, the Clarinet Quintet 'Crawhall' and The Yellow Wallpaper for mezzo-soprano and string quintet, all composed in 2011. In these, the Maggini String Quartet are joined by Andrew Marriner (clarinet), Rebecca de Pont Davies (mezzo-soprano) and John Tattersdill (double bass). Regarding the subtitle of 'Crawhall' for the Quintet, Ronald Corp states:

"Joseph Crawhall (1821–1896) was an engraver, writer, businessman, patron of arts, book designer, collector of antiquities, campaigner for the perseveration of architecture and a significant character in the life of Newcastle. His colourful life and wonderful woodblock illustrations have inspired this clarinet quintet which I hope gives some flavour of this most remarkable and likeable man."

The Yellow Wallpaper is a dramatic scena with text by Francis Booth adapted from the short story of Charlotte Perkins Gilman. This work continues the current trend for chamber compositions and unconventional instrumental/vocal groupings: Lullaby for a Lost Soul features a setting for counter-tenor, vibraphone, flute and cello with re-imaginings of the melancholy music of John Dowland. The text follows themes of loss, death and helplessness. It was recorded in September 2012.

In January 2013, three of these works, The Yellow Wallpaper, Songs of the Elder Sisters and Lullaby for a Lost Soul were performed at the event 'Corp de Ballet'[22] in collaboration with The Chantry Dance Company for a CD launch at the Village Underground, Shoreditch, London.

Beside the recordings shown in the discography below, other recordings of compositions by Corp include:

Programme notes, music excerpts and links to publishers and score purchasing facilities can be found on the Ronald Corp website.

Jazz Conversations Clark Terry
Update Required To play the media you will need to either update your browser to a recent version or update your Flash plugin.