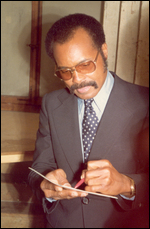 Cooper was born in St. Petersburg, Florida. He played in a territory band with Nat Towles in Texas in the late 1940s, and gigged with Lionel Hampton in 1953. He played in the house band at the Apollo Theater in New York City in the mid-1950s, and following this spent time with Benny Goodman. Late in the 1950s he and his brother Steve formed a unit, the Cooper Brothers Band. From 1962 to 1969 he was trombonist in Duke Ellington's Orchestra. In 1973 he moved to Los Angeles and played in various jazz orchestras there over the next several decades; among them were The Juggernaut and Bill Berry's L.A. band. He has never recorded as a leader.

Cooper currently is a bandleader, of the Buster Cooper Trio, at The Garden Restaurant, Saint Petersburg, Florida.

No Moon At All Keith Jarrett & Charlie Haden
Update Required To play the media you will need to either update your browser to a recent version or update your Flash plugin.