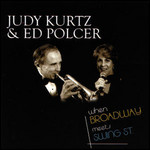 Ed Polcer (born February 10, 1937 in Paterson, New Jersey) is an American classic jazz cornetist, band leader, festival director, club owner/manager and mentor of young musicians. He has been described as a "melodic mellow-toned cornetist with an unforced delivery".[1] Ed started leading jazz bands while attending Princeton University. While at Princeton studying engineering, Ed was headed toward a promising career as a professional baseball player. During that time, he was asked to play at the Monaco wedding of Princess Grace and Prince Rainier, as well as a concert in Carnegie Hall, so Ed made the decision to follow the music instead of a baseball career.

Along with his wife, singer/actress Judy Kurtz, Ed managed and co-owned (with Red Balaban) Eddie Condon's Jazz Club in New York City from 1977 through 1985. Sharing the bandstand with Ed at the club were such musicians as Vic Dickenson, Herb Hall and Connie Kay. Ed was instrumental in giving several younger musicians, such as Scott Hamilton, Warren Vache, Dan Barrett, and Mark Shane a showcase of their talents at Eddie Condon's. After the wrecking ball demolished the club, Ed toured the country with his shows "A Night at Eddie Condon's", "The Magic of Swing Street", and "When Broadway Meets Swing Street". He served as musical director of several jazz festivals, including the North Carolina Jazz Festival, Colorado Springs Jazz Party, and San Diego Jazz Party.

In the 1980's he served as president of the New York International Art of Jazz organization, which promoted community and corporate involvement in jazz education.[3] Ed played for five U.S. Presidents, including the 1994 Congressional Ball at the White House for President Clinton, and played in Thailand with the King of Thailand, a jazz clarinetist and enthusiast.

Ed's father and uncle were part-time musicians. His first instrument was the xylophone, which he played in local church shows and talent contests starting at the age of five, along with his younger sister Betty. He was encouraged to learn a second instrument, the trumpet, at the age of nine. His first marriage to Barbara Fimbel ended in divorce. He and Barbara had one daughter, Karen, and they adopted a Vietnamese war orphan, James. In 1976, Ed married Judy Kurtz, and they have two sons - Sam, born 1977, and Ben, born 1978.

Love Theme (The Godfather) Richard Galliano
Update Required To play the media you will need to either update your browser to a recent version or update your Flash plugin.