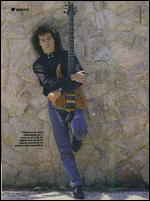 His father was a professional bass player, but Nico debuted in music by playing the acoustic guitar at the age of 10, having classes with Paulinho Nogueira. He changed to bass at 16, to fill in the void in a schoolmate's band. And he loved his new instrument.

At age of 17, he went to the U.S. to study harmony and orchestration at the University of California. Back in Brazil he went to study at CLAM, with famous Brazilian bassists Luis Chaves and Amilton Godoy. Later, in 1976, he again left Brazil and headed to New York, willing to study and perform with his instrument at a deeper level. There, he played with several important musicians of the jazz scene, including Wayne Shorter, Pat Metheny, Sadao Watanabe, Larry Coryell, Fred Hersh, Larry Willis, Joe Diorio, John Hicks, Steve Slagle, Victor Lewis, Don Salvador and Charlie Rouse.

In the USA, he mastered various bass playing techniques, being one of the pioneers of fretless and 6-string bass in Brazil when he came back on 1981, the same year in which he released the first bassist solo album in the country, titled "Nico Assumpção". In 1982 he moved to Rio de Janeiro, where he lived for the rest of his life, and turned into one of the most popular bassists of the country among musicians and artists for recording and shows, having played and/or recorded with Milton Nascimento, Caetano Veloso, Gilberto Gil, João Bosco, Maria Bethânia, Edu Lobo, César Camargo Mariano, Toninho Horta, Luiz Avellar, Wauke Wakabaiashi, Marco Pereira, Ricardo Silveira, Gal Costa, Hélio Delmiro, Maria Bethânia, Márcio Montarroyos, Raphael Rabello, Edu Lobo, Léo Gandelman and Victor Biglione, among others.

What Needed Doin' Done Travellin' Blue Kings
Update Required To play the media you will need to either update your browser to a recent version or update your Flash plugin.