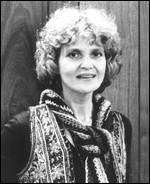 Fran Landesman (October 21, 1927 July 23, 2011) was an American lyricist and poet. She grew up in New York City and lived for years in Saint Louis, Missouri, where her husband Jay Landesman operated the Crystal Palace nightclub. One of her best-known songs is "Spring Can Really Hang You up the Most."

Born Frances Deitsch in New York City in 1927, she had a mother who was a journalist and a father who was a dress manufacturer. Her brother Sam Deitsch founded and operated some neighborhood bars in St Louis. With his partner Ed Moose, he later founded the Washington Square Bar and Grill in San Francisco.

Deitsch attended private schools through high school. For college, she studied at Temple University in Philadelphia and the Fashion Institute of Technology in New York City. There she initially worked in the fashion industry, as her father did.

While in New York, Deitsch met writer Jay Landesman, the publisher of the short-lived Neurotica magazine, whom she married on July 15, 1950. They had two sons, Cosmo, who became a journalist, and Miles Davis Landesman, who became a musician and performance artist. Their nephew Rocco Landesman became a producer.

She and her husband moved to St. Louis, Missouri, his home town. There Jay and his brother Fred Landesman started the Crystal Palace nightclub.[1] This was a successful venture, attracting big-name acts and producing avant-garde theatre.

After sitting in the bar of the Crystal Palace, listening to musicians and audiences, Fran Landesman was inspired to write song lyrics beginning in 1952. One of her best-known is "Spring Can Really Hang You up the Most", her exploration of T. S. Eliot's "April is the cruelest month..." The Palace's pianist Tommy Wolf set her lyrics to music, and the song became a hit, leading to more Landesman–Wolf collaborations.

Fran Landesman also wrote the lyrics for a proposed musical version of A Walk on the Wild Side, adapted from the 1956 novel by Nelson Algren, known for his portrayal of down-and-outers.[3] In 1960, she began writing with singer/pianist/composer Bob Dorough, who was brought to St. Louis by Tommy Wolf to play the lead in the musical.[4] (The work was adapted as a film by the same name, released in 1962.)

The Landesman/Dorough song "Nothing Like You" was recorded by Miles Davis and included on his 1967 album Sorcerer. Their "Small Day Tomorrow" has been recorded by many singers, and was the title of Dorough's 2007 CD, which featured 12 songs with Landesman lyrics.[4]

In 1964 the Landesmans left St. Louis to move to London. She wrote lyrics for a number of well-known musicians (with an emphasis on jazz) such as Pat Smythe, Georgie Fame, Tom Springfield, Richard Rodney Bennett and Dudley Moore. She continued to collaborate with composers in the USA, most notably John Simon and Roy Kral.

She also wrote the lyrics for her husband's musical, Dearest Dracula, produced in 1965at the Dublin Theatre Festival.[5] [6]

In the 1970s, Fran Landesman also began writing and publishing poetry.[7] In the UK she became better known for this work than for her songs. She published several volumes of poetry, and performed her work at festivals and on BBC Radio.

In 1994 Landesman met British composer Simon Wallace, with whom she collaborated for the rest of her life. She wrote some 300 songs in total.[8] Theatre shows based on Landesman/Wallace songs include There's Something Irresistible in Down (1996), produced at the Young Vic by members of the Royal Shakespeare Company; Forbidden Games (1997) performed at the Ustinov Theatre Bath, the Pleasance Theatre Edinburgh, and the Gdansk Shakespeare Festival; and Queen of the Bohemian Dream (2007), produced at the Source Theatre in Washington D.C.. The Decline of the Middle West (1995), performed at The Supper Club in Manhattan, also featured Landesman's lyrics.

In 1996 the BBC received a number of complaints[9] after Fran Landesman appeared on Desert Island Discs and requested a supply of cannabis seeds as her luxury item.[10]

In the last 10 years of her life, Landesman performed more frequently, often in evenings in which she would recite her poetry, sing her songs, and occasionally talk about her life and work. In 2003 she appeared in New York at Joe's Pub with Jackie Cain and Bob Dorough. In October 2008 she returned to St Louis to do a one-woman show at the Gaslight Theatre.

Throughout 2010 and 2011, Landesman made bi-monthly appearances at RADA for Farrago poetry, and every six months hosted a lunchtime concert at The 606 Club in London. In May 2010 the South Bank Centre presented A Night Out with Fran Landesman at the Purcell Room, and in April 2011 the Leicester Square Theatre presented An Evening with Fran Landesman as part of the Art of Song Festival. Her last appearance was at RADA on July 21, 2011, two days before her death at the age of 83.[11]

Take It Easy Heiri Känzig
Update Required To play the media you will need to either update your browser to a recent version or update your Flash plugin.