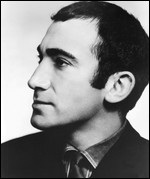 He was born Lionel Begleiter, the youngest of seven surviving children of Galician Jews, Yetta (née Darumstundler) and Morris Begleiter, a master tailor.[3] He grew up in Stepney; his father worked in the area as a tailor in a garden shed. The family had escaped the deadly pogroms against Jews by Ukrainian cossacks in Galicia, which was then part of the Austrian Empire.

Lionel Begleiter changed his surname to Bart, said to be derived from when he passed by St Bartholomew's Hospital on the top deck of a bus, after he had completed his National Service with the Royal Air Force. A more likely derivation of Bart is from the silk-screen printing company he founded with John Gorman, G and B Arts.

As a young man he was an accomplished painter. When Bart was aged six, a teacher told his parents that he was a musical genius. His parents gave him an old violin, but he did not apply himself and the lessons stopped.[4]

At the age of 14 he obtained a Junior Art Scholarship to Saint Martin's School of Art. One Friday afternoon he was suspended for "mischievousness" along with another student, John Groom, for making a noise with the rest of the class, involving set squares and other paraphernalia. On the following Monday, he returned to the School with a long explanation of his peripheral involvement in the disturbance, and was reinstated. After St Martin's he gave up his ambition to be a painter, and took jobs in silk-screen printing works and commercial art studios. He never learned to read or write musical notation.

He started his songwriting career in amateur theatre, first at The International Youth Centre in 1952 where he and a friend wrote a revue together called IYC Revue 52. The following year the pair auditioned for a production of the Leonard Irwin play The Wages of Eve at London's Unity Theatre. Shortly afterward Bart began composing songs for Unity Theatre productions, contributing material (including the title song) to its 1953 revue Turn It Up, and songs for its 1953 pantomime, an agitprop version of Cinderella. While at the Unity he was talent-spotted by Joan Littlewood, and so joined Theatre Workshop.[5] He also wrote comedy songs for the Sunday lunchtime BBC radio programme The Billy Cotton Band Show.[6]

He first gained widespread recognition through his pop songwriting, penning numerous hits for the stable of young male singers promoted by artist manager and music publisher Larry Parnes. Bart's pop output in this period includes the hits "Living Doll" (written for Cliff Richard) and "Rock with the Cavemen", "Handful of Songs", "Butterfingers" and "Little White Bull" (for Tommy Steele). During this period, Steele and Mike Pratt were his songwriting partners. He won three Ivor Novello Awards in 1957, a further four in 1958, and two in 1960. He wrote the theme song for the 1963 James Bond film From Russia with Love. His other hits include: "Do You Mind?" (recorded by both Anthony Newley and Andy Williams), "Big Time" (a 1961 cover by Jack Jones of his "Fings Ain't Wot They Used T'Be" show tune), "Easy Going Me" (Adam Faith) and "Always You And Me" (with Russ Conway).

Bart was also responsible for the discovery of two of Parnes' biggest stars. It was on his recommendation that Parnes went to see singer Tommy Hicks, whom he signed and renamed Tommy Steele, and Bart also suggested that Parnes see singer Reg Smith, who was then performing at the Condor Club. Although Parnes missed his performance, he went round to Smith's house and signed him up on the basis of Bart's recommendation. Smith went on to score a number of UK hits under his new stage name Marty Wilde.[7]

Twenty-seven years after it became a number one hit for Cliff Richard, "Living Doll" was re-recorded by The Young Ones and Richard for Comic Relief, and spent another three weeks at number one.[8]

Bart's first professional musical was 1959's Lock Up Your Daughters, based on the 18th-century play Rape upon Rape by Henry Fielding. Following that, Fings Ain't Wot They Used T'Be produced by Joan Littlewood's Theatre Workshop, was notable for encouraging the use of authentic Cockney accents on the London stage. Oliver! (1960), based on Dickens's Oliver Twist, was a huge hit from the beginning and became the first modern British musical to be transferred successfully to Broadway.

It has sustained its popularity to the present day, and for many years was the standard musical performed by schools in the UK. The original stage production, which starred Ron Moody and Georgia Brown, contained such song hits as "As Long As He Needs Me" and "Consider Yourself"; it is also notable for featuring Australian satirist Barry Humphries in his first major stage role as Mr Sowerberry, and future rock stars Steve Marriott[9] (later the lead singer of the Small Faces and Humble Pie), Davy Jones (pre-Monkees) and Phil Collins (of Genesis fame) as The Artful Dodger.

The music for Oliver! was transcribed by Eric Rogers, who wrote and composed 21 scores for the Carry On films. Bart hummed the melodies and Rogers wrote the notes on his behalf as Bart could not read or write music.[10]

In 1968 Oliver! was made into a film starring Ron Moody, Oliver Reed and Shani Wallis that won several Oscars, including best film. It is estimated that around this time Bart was earning 16 pounds a minute from Oliver!.[11]

Bart's next two musicals, Blitz! (1962) (from which came the song "Far Away", a hit for Shirley Bassey) and Maggie May (1964) had respectable West End runs (Blitz!, at the time London's most expensive musical ever, had a run of 568 performances),[12] but Twang! (1965), a musical based on the Robin Hood legend, was a flop and La Strada (1969), which opened on Broadway in New York City, closed after only one performance. By this time Bart was taking LSD and other drugs and was drinking heavily, and this may have affected both his work and his business judgement.[13][4]

He rashly used his personal finances to try to rescue his last two productions, selling his past and future rights to his work, including Oliver! which he sold to the entertainer Max Bygraves for £350 (Bygraves later sold them on for £250,000)[14] to realise capital to finance the shows; Bart himself later estimated that this action lost him over £1 million.[13] By 1972, Bart was bankrupt with debts of £73,000. A twenty-year period of depression and alcoholism ensued. He eventually stopped drinking, although the years of substance abuse seriously damaged his health, leaving him with diabetes and impaired liver function.[13]

In May 1977, an autobiographical musical called Lionel! opened in the West End at the New London Theatre. It was loosely based on Bart's early life as a child prodigy. Bart added some new songs for the show and expectations were high. The cast included Clarke Peters, Marion Montgomery and Adrienne Posta. The role of Lionel was shared by a young Todd Carty and theatre unknown Chris Nieto. The show closed after six weeks, losing £250,000.

Bart continued writing songs and themes for films, but his only real success in his later years was "Happy Endings", a 30-second jingle for a 1989 Abbey National advertising campaign, which featured Bart playing the piano and singing to children.[15]

He received a special Ivor Novello Award for life achievement in 1986. Cameron Mackintosh, who owned half the rights to Oliver!, revived the musical at the London Palladium in 1994 in a version rewritten by Lionel Bart himself. Mackintosh gave Bart a share of the production royalties. At the peak of his career, Bart was romantically linked in the media with singers Judy Garland and Alma Cogan,[6] though he was in fact gay. His sexuality was known to friends and colleagues but he did not "come out" until a few years before his death.[13]

A musical play based on Bart's life and using his songs, It's a Fine Life, was staged in 2006 at the Queen's Theatre, Hornchurch.[20]

This article uses material from the article Lionel Bart from the free encyclopedia Wikipedia and it is licensed under the GNU Free Documentation License.