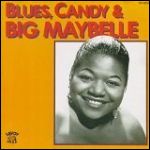 Born in Jackson, Tennessee, United States, Big Maybelle sang gospel as a child and by her teens had switched to rhythm and blues. She began her professional career with Dave Clark's Memphis Band in 1936, and also toured with the all female International Sweethearts of Rhythm.[3] She then joined Christine Chatman's Orchestra, and made her first recordings with Chatman in 1944, before recording with the Tiny Bradshaw's Orchestra from 1947 to 1950.[4]

Her debut solo recordings, recorded as Mabel Smith, were for King Records in 1947, when she was backed by Oran "Hot Lips" Page, but she had little initial success.

In 1952 she was signed by Okeh Records, whose record producer Fred Mendelsohn gave her the stage name 'Big Maybelle' because of her loud yet well-toned voice.[5] Her first recording for Okeh, "Gabbin' Blues", was a number 3 hit on the Billboard R&B chart, and was followed up by both "Way Back Home" and "My Country Man" in 1953.

In 1955 she recorded the song "Whole Lotta Shakin' Goin On", produced by up-and-coming producer Quincy Jones,[6] a full two years before rockabilly then rock and roll singer Jerry Lee Lewis's version. Lewis credited Smith's version as being the inspiration to make his version much more louder, raunchy and raucous, with a driving beat and a spoken section with a come-on that was considered very risque for the time.

More hits followed throughout the 1950s, particularly after signing with Savoy Records later in 1955, including "Candy" (1956), one of her biggest sellers.

During this time she also appeared on stage at the Apollo Theater in New York City in 1957, and at the 1958 Newport Jazz Festival she sang "Jazz on a Summer's Day", which was filmed at the festival along with Mahalia Jackson and Dinah Washington on stage.[7]

After 1959 she recorded for a variety of labels but the hits largely dried up. She continued to perform into the early 1960s. Her last hit single was in 1967 with a cover of "96 Tears" by Question Mark & the Mysterians[8]

Smith died in a diabetic coma in 1972, in Cleveland, Ohio. She was survived by her only child Barbara Smith, and many grandchildren.[1]

Her final album, Last of Big Maybelle, was released posthumously in 1973.

This article uses material from the article Big Maybelle from the free encyclopedia Wikipedia and it is licensed under the GNU Free Documentation License.