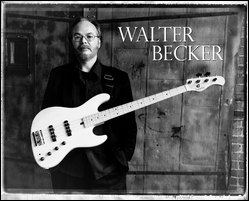 Walter Carl Becker (February 20, 1950 – September 3, 2017) was an American musician, songwriter, and record producer. He was best known as the co-founder, guitarist, bassist, and co-songwriter of Steely Dan.

Becker met future songwriting partner Donald Fagen while they were students at Bard College. After a brief period of activity in New York, the two moved to California in 1971 and formed the nucleus of Steely Dan, which enjoyed a critically and commercially successful ten-year career. Following the group's dissolution, Becker moved to Hawaii and reduced his musical activity, working primarily as a record producer. In 1985, he briefly became a member of the English band China Crisis, producing and playing synthesizer on their album Flaunt the Imperfection.

After Becker's parents separated when he was a boy, his mother, who was British, returned to England. He was raised in Queens by his father and grandmother. His father sold paper-cutting machinery in Manhattan.[4] He graduated from Stuyvesant High School in Manhattan in 1967.[5] After starting out on saxophone, he switched to guitar and received instruction in blues technique from neighbor Randy Wolfe.[6]

Donald Fagen overheard Becker playing guitar at a campus café when they were both students at Bard College in Annandale-on-Hudson, New York. In an interview many years later, Fagen said, "I hear this guy practicing, and it sounded very professional and contemporary. It sounded like, you know, like a black person, really."[7] They formed the band Leather Canary, which included fellow student Chevy Chase on drums.[8] At the time, Chase called the group "a bad jazz band."[9]

Becker left the school in 1969 before completing his degree and moved with Fagen to Brooklyn, where the two began to build a career as a songwriting duo. They were members of the touring band for Jay and the Americans[2] but used pseudonyms. They also composed music for the soundtrack to You've Got to Walk It Like You Talk It or You'll Lose That Beat, a film starring Richard Pryor that was released in 1971.[10]

In 1971, Becker and Fagen moved to Los Angeles and formed Steely Dan with guitarists Denny Dias and Jeff "Skunk" Baxter, drummer Jim Hodder, and vocalist David Palmer. Fagen played keyboards and sang, while Becker played bass guitar.[11][12][13] Steely Dan spent the next three years touring and recording before swearing off touring in 1974, confining themselves to the studio with personnel that changed for every album. In addition to co-writing all of the band's material, Becker played guitar and bass guitar and sang background vocals.[2]

Pretzel Logic (1974) was the first Steely Dan album to feature Becker on guitar. "Once I met (session musician) Chuck Rainey", he explained, "I felt there really was no need for me to be bringing my bass guitar to the studio anymore".[14]

Despite the success of Aja in 1977, Becker suffered from setbacks during this period, including an addiction to narcotics. After the duo returned to New York in 1978, Becker's girlfriend, Karen Roberta Stanley, died of a drug overdose in his apartment on January 30, resulting in a wrongful death lawsuit against him. Soon after, he was hit by a cab in Manhattan while crossing the street and was forced to walk with crutches while recovering.[5] His exhaustion was exacerbated by commercial pressure and the complicated recording of the album Gaucho (1980). Becker and Fagen suspended their partnership in June 1981.[15]

During the 1980s, he produced albums for Michael Franks and Fra Lippo Lippi.[21] He produced Rickie Lee Jones's album Flying Cowboys,[22] which was certified Gold by the RIAA in 1997.[23] In 1985, he produced the album Flaunt the Imperfection by China Crisis and is credited on the album as a member of the band.[11] Becker and Fagen reunited in 1986 to collaborate on Zazu, the debut album by Rosie Vela.[24] In 1991, Becker appeared in Fagen's New York Rock and Soul Revue.[25]

Steely Dan toured for the first time in nineteen years, and in 2000 they released Two Against Nature, their first album in twenty years. The album won four Grammy Awards, including Album of the Year. In 2001 they were inducted into the Rock and Roll Hall of Fame and received honorary doctorates from the Berklee College of Music, which they accepted in person.[28] In 2003, they released the album Everything Must Go with Becker singing lead vocal on "Slang of Ages".[29] They followed the album with a tour.[30]

In 2005, Becker co-produced and played bass guitar on the album All One by Krishna Das and played guitar on the album Tough on Crime by Rebecca Pidgeon. He co-wrote "I'm All Right" from the album Half the Perfect World (2006) by Madeleine Peyroux and "You Can't Do Me" and the title track from her album Bare Bones (2009). He was inducted into the Long Island Music Hall of Fame in 2008.[31]

His second solo album, Circus Money, was released on June 10, 2008, fourteen years after its predecessor.[32] The songs were inspired by reggae and other Jamaican music.[6]

Becker was married to Elinor, a yoga teacher, and they had two children,[33] including adopted daughter Sayan.[34] Becker wrote the song "Little Kawai" for his son, and it became the final song on the album 11 Tracks of Whack.[35][4]

On September 3, 2017, Becker died of esophageal cancer at his home in Manhattan, New York.[36][37] Initially, no cause of death or other details were announced,[11] but a statement released in November by Becker's widow detailed his struggle with the disease.[36]

Musicians such as Julian Lennon,[38] Steve Lukather,[39] and John Darnielle of the Mountain Goats[40] made public statements mourning Becker's death. Rickie Lee Jones, whose album Flying Cowboys was produced by Becker, recalled her long friendship with him in an editorial she wrote for Rolling Stone.[41]

In a statement released to the media the day of Becker's death, Fagen recalled his long-time friend and musical partner as "Smart as a whip, an excellent guitarist and a great songwriter," and closed by stating that he intended to "Keep the music we created together alive as long as I can with the Steely Dan band."[42]

This article uses material from the article Walter Becker from the free encyclopedia Wikipedia and it is licensed under the GNU Free Documentation License.