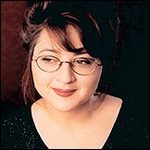 Susie Arioli is a Canadian jazz singer from Montreal. She has been nominated for three Juno Awards.

Arioli had been singing in jazz clubs in Montreal when she met guitarist Jordan Officer at a jam led by Stephen Barry.[1] Together they started the Susie Arioli Band. Their first big opportunity came in 1998. After a successful outdoor show, they were asked by the Montreal International Jazz Festival to open for Ray Charles. The band's opening set got the attention of Montreal critics, and soon after it released the debut album, It's Wonderful.

Arioli has received several Juno nominations.[2] Her second album, Pennies from Heaven, was the last recording of jazz pianist Ralph Sutton. Her third album, That's for Me, was produced by John Snyder. Her fourth album, Learn to Smile Again, was a departure and featured six songs by country songwriter Roger Miller. For the fifth album, Night Lights, she returned to jazz with a collection of standards. All the albums featured guitarist Jordan Officer.

In an article in Atlantic Monthly, Arioli was recognized by jazz writer Francis Davis as an emerging jazz talent.

This article uses material from the article Susie Arioli from the free encyclopedia Wikipedia and it is licensed under the GNU Free Documentation License.