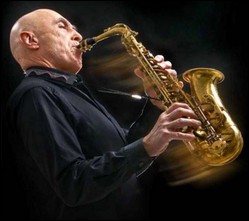 Paul John (P.J.) Perry Guloien (born 2 December 1941 in Calgary) is a jazz saxophonist from Edmonton, Alberta. He has won one Juno award as a solo artist, and one for his work with The Rob McConnell Tentet.

Perry was born to prominent western Canadian band leader Paul Perry and Margaret Yeo. Early in life they moved around Canada between Medicine Hat, Regina, Sylvan Lake and Vancouver. He learned to play the clarinet and piano before becoming a saxophonist for his father's band. Perry, known for his bebop-influenced style of play, is active across Canada as a studio musician, jazz soloist, concert performer, and recording artist with Justin Time Records.

This article uses material from the article P.J. Perry from the free encyclopedia Wikipedia and it is licensed under the GNU Free Documentation License.