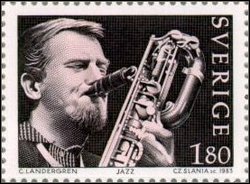 Lars Gullin was a child prodigy on the accordion. At age thirteen, he played clarinet in a military band and later learned the alto saxophone, but after moving to Stockholm in 1947 became a professional musician as a pianist. He planned on a classical career, studying privately with classical pianist Sven Brandel. Although he actually filled the baritone chair in Seymour Österwall’s band in 1949 by chance, it was enough for him to decide that it was an instrument with possibilities, influenced too by hearing the United States baritone saxophonist Gerry Mulligan for the first time on the Birth of the Cool recordings. He worked as a member of Arne Domnérus’s septet (initially co-led by the trumpeter Rolf Ericson) for two years from 1951; the group mainly performed at Nalen, a leading dance spot in Stockholm.

At the same time he began to work with visiting American musicians, recording with James Moody, Zoot Sims and Clifford Brown. Most importantly, he first performed with Lee Konitz in 1951, an association which was to be repeated several times in future years.

He formed his own group in 1953, probably the only regular group he was to lead. It was short-lived, breaking up that November, after Gullin was responsible for causing the group to be involved in an automobile accident, although no one was seriously hurt. The next year, 1954, he won the best newcomer award in the United States Down Beat magazine, after two March 1953 Swedish sessions were leased and issued by Contemporary Records as a 10” LP. Later Gullin albums were leased to Atlantic Records in the United States. Gullin toured several European countries with Chet Baker in October 1955, in a group which was marred by tragedy; it was Gullin who found the body of the group's pianist Dick Twardzik, victim of a heroin overdose, on October 21, in a Paris hotel room.

The remainder of Gullin’s career was blighted by his own narcotics problems, and sometimes he survived on artists’ grants from the Swedish government. He was restricted by illness for much of the later part of 1958. During most of 1959 Gullin was active in Italy, he played with Chet Baker again and with the jazz alto saxophonist (and businessman) Flavio Ambrosetti, making radio broadcasts with him in Lausanne, Switzerland.

In the 1960s he continued to work occasionally with leading American players, including Archie Shepp, with whom he recorded in 1963. One of his last major statements was his Aeros aromatic atomica suite recorded in 1973.

He died of a heart attack, brought on by his long-term addiction to methadone. A recording jointly led by Lee Konitz and pianist Lars Sjösten, Dedicated to Lee … Play the Music of Lars Gullin was recorded in 1983, and issued by Dragon Records, who have also issued 11 CDs of Gullin’s recordings. The film Sven Klang's Combo (Sven Klangs kvintett, 1976) is a fictionalised version of the Swedish jazz scene of the 1950s, and the saxophonist Lars is indeed based on Gullin.

His son, Peter Gullin, (12 April 1959, Milan, Italy – 7 October 2003, Uppsala, Sweden) was also a baritone saxophonist and composer. The elder Gullin’s composition "Peter of April" was dedicated to him. The classic tune "Danny's Dream" was dedicated to his first son Danny Gullin and "Gabriella" to his daughter, Gabriella Gullin (born 1961), a composer and conductor.

This article uses material from the article Lars Gullin from the free encyclopedia Wikipedia and it is licensed under the GNU Free Documentation License.