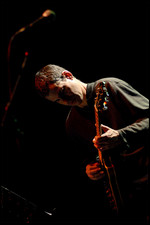 Ben Monder is an American jazz guitarist and composer. In addition to having released solo albums he has played as a sideman on more than a hundred albums. Critics have found the style of Monder's solo albums difficult to describe, though they praise his creative genius.[1]

Monder attended the University of Miami. He has worked with a wide variety of musicians including Lee Konitz, Toots Thielmans, Paul Motian and Maria Schneider.[2]

In 1995 he recorded his debut album, Flux, featuring drummer Jim Black and bassist Drew Gress.[3] A 2001 recording (an improvisation recorded in a single day) with saxophone player Bill McHenry, Bloom, wasn't released until 2010. In between, he released a genre-bending solo album, Oceana (2005), and an album with pianist Chris Gistrin and drummer Dylan van der Schyff, The Distance (2006). In 2007, he recorded At Night with singer and electronic musician Theo Bleckmann and drummer Satoshi Takeishi.[1]

This article uses material from the article Ben Monder from the free encyclopedia Wikipedia and it is licensed under the GNU Free Documentation License.

Lover Man (Oh Where Can You Be) Jazz Club Trio - Plus
Update Required To play the media you will need to either update your browser to a recent version or update your Flash plugin.