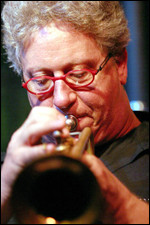 Hagans grew up in Dayton, Ohio. His early inspirations included Miles Davis, Freddie Hubbard, and Thad Jones, to whom he dedicated For the Music Suite, a 40-minute piece for jazz orchestra composed on a grant from the National Endowment for the Arts. In 1974, Hagans joined the Stan Kenton band,[1] with whom he played until 1977, when he toured with Woody Herman. He then left for Europe, where he lived in Malmö, Sweden, a hotbed of the European jazz scene. While in Europe, he toured extensively and played with Dexter Gordon, Kenny Drew, Horace Parlan, and Thad Jones. His first recorded composition, "I Hope This Time Isn't the Last," appears on the album Thad Jones Live at Slukefter (Metronome, 1980).

In 1987, he moved to New York City. He has performed with Maria Schneider, Yellowjackets, Steps Ahead, Secret Society, and Gary Peacock. Hagans has worked extensively with producer and saxophonist Bob Belden on a variety of recordings and live performances, including their ongoing Animation/Imagination project.[2] Festivals at which he has performed include the Mount Fuji Festival in Japan, the Montreal Jazz Festival, the Berlin Jazz Tage, and the Montreux Jazz Festival in Switzerland.

Hagans has taught master classes at universities throughout the world.

He taught at the University of Cincinnati from 1982 to 1984 and at Berklee College of Music from 1984 to 1987.[1] From 1996 to 2010, he was Artistic Director and Composer-in-Residence for the Norrbotten Big Band located in Luleå, Sweden. The Norrbotten Big Band is a 17-piece jazz orchestra for whom Hagans wrote and arranged original compositions with guest artists including Randy Brecker, Joe Lovano, Dave Liebman, Peter Erskine, and Rufus Reid, an enterprise culminating in the Grammy nominated album, The Avatar Sessions: The Music of Tim Hagans, for which the Norbotten Big Band traveled to New York. His compositions are featured on numerous recordings with the Norrbotten Big Band, including Future North (Double-Time, 1998), Future Miles (ACT, 2002), and Worth the Wait (Fuzzy Music, 2007).

Hagans has been commissioned by several other European jazz orchestras, including the NDR Big Band in Hamburg, UMO in Helsinki, and he was Composer-in-Residence at the Jazz Baltica Festival in 2000. In 2008, he was awarded the ASCAP/IAJE Established Composer Award, and in 2009 he was commissioned by the Barents Composers Orchestra to write a piece for strings, woodwinds, and percussion: Daytonality, a piece based on improvisational melodic language.

Hagans is the subject of the feature documentary Boogaloo Road, directed by Runar Enberg and Marianne Soderberg. He is a featured soloist on Howard Shore's soundtrack for the feature film The Score starring Marlon Brando, Edward Norton, and Robert De Niro.

Following his interest in exploring theatrical venues for innovative jazz, he is Composer-in-Residence with the Michele Brangwen Dance Ensemble, a dance company located in Houston, Texas, and in New York City. In January 2012, his composition Outside My Window was performed with the MBDE at Dance Theatre of Harlem. He also performs with author-actor Peter Josyph in duets consisting of haiku texts and freely improvised trumpet, including Josyph's the way of the trumpet, a haiku novel written for and dedicated to Hagans.

In June 2012, Hagans was awarded an honorary doctorate from the Sibelius Academy in Helsinki.

This article uses material from the article Tim Hagans from the free encyclopedia Wikipedia and it is licensed under the GNU Free Documentation License.

Blues For Nicole Silvan Zingg
Update Required To play the media you will need to either update your browser to a recent version or update your Flash plugin.