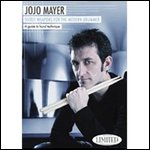 Mayer is the son of touring musician and bass player Vali Mayer[1] and began his career as a drummer at an early age, receiving his first drum set at the age of two. Having taught himself throughout his childhood, he broke out into the professional music scene at the age of 18, joining the Monty Alexander group. Touring with the group launched him into the major jazz music scene, and he has played at the North Sea Jazz Festival, Montreux, Nice, and Athens etc., which culminated with his gigging with jazz-greats such as Dizzy Gillespie and Nina Simone. Eventually, after playing with a great variety of artists, Mayer moved away from jazz and into Drum 'n' Bass.[2]

Jojo Mayer is known for bringing together jazz, drum and bass, jungle, and other influences. He is also famous for his ability to play the rhythms of programmed jungle drum 'n' bass music on acoustic drums, terming this technique "reverse engineering", a phrase borrowed from computing.[2] He executes this approach using various methods such as the heel-toe bass drum technique, the Moeller stroke, the Valving technique, and the "pull-out" or "push-pull" accent which takes the beat on the rebound. Using these techniques, he can play beats at astonishing speeds. A few of his main influences are Tony Williams, Jack DeJohnette and Buddy Rich.

He is the leader of live electronica trio Nerve, which he founded in 1997.

He played with the guitarist David Fiuczynski in the avant-garde jazz rock band Screaming Headless Torsos and in the fusion jazz band, Intergalactic Maiden Ballet.

He ran the popular Prohibited Beatz live electronica party in NYC from 1996–2001.

He was featured as the cover story of the January 2008 issue of Modern Drummer magazine. Jojo Mayer was interviewed by DrummerConnection.com in May 2010,[3] and by Linus Wyrsch on "The Jazz Hole" for breakthruradio.com in July 2010.[4]

Mayer is a long-time Sonor endorser who also uses Sabian cymbals, Vic Firth sticks and Evans Drumheads. He helped Sonor design the Jungle kit and snare. He has also collaborated with Sabian to create two lines of cymbals, the Vault "Fierce" series, and "Omni" series, which includes both AAX and HHX models.[5] His Vault Fierce cymbals feature a raw, unlathed finish, and extensive hand hammering, while the Omnis are designed to function as both rides and crashes. He also helped to develop the hoop crash of Sabian and the perfect balance (single pedal of Sonor).

This article uses material from the article Jojo Mayer from the free encyclopedia Wikipedia and it is licensed under the GNU Free Documentation License.

I Love Being Here With You Ernestine Anderson
Update Required To play the media you will need to either update your browser to a recent version or update your Flash plugin.