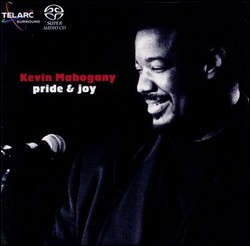 Kevin Mahogany (born July 30, 1958)[1] is an American jazz vocalist who became prominent in the 1990s. He is known for his scat singing,[2] and his singing style has been compared with jazz singers Joe Williams[3] and Johnny Hartman.[4]

Kevin Mahogany began his study of music as a child with piano and later learned to play the clarinet and baritone saxophone, performing with jazz bands and teaching music while still in high school. "When I was a kid, music was just as important as English and math in our household" says Mahogany. "In fact piano lessons were a grade school staple for the whole family."[5] Mahogany attended Baker University, where he performed with both instrumental and vocal ensembles and formed a vocal jazz group. In 1981, Mahogany received his BFA in Music and English Drama.

After graduation, he returned to Kansas City where he attracted a local following in the 1980s performing with his groups, "The Apollos" and "Mahogany." In 1991, he was featured on a CD by Frank Mantooth.[6]

His first CD release as a solo artist was Double Rainbow in 1993. This was followed by the self-titled album Kevin Mahogany, which won him his first critical acclaim in the media, prompting Newsweek to call Mahogany "the standout jazz vocalist of his generation."[7]

Kevin Mahogany lists his vocal influences as Lambert, Hendricks and Ross, Al Jarreau and Eddie Jefferson.[9] As a jazz educator, Mahogany has taught at the Berklee College of Music in Boston and the University of Miami.[10]

Under his own label, Mahogany Music:

This article uses material from the article Kevin Mahogany from the free encyclopedia Wikipedia and it is licensed under the GNU Free Documentation License.