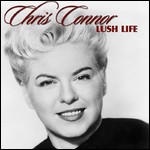 She was born as Mary Jean Loutsenhizer in Kansas City, Missouri, to Clyde Loutsenhizer (1882-1949) and Mabel E. Shirley (1896-1941). She became proficient on the clarinet, having studied for eight years throughout junior high and high school.[2]

Following the death of her mother Mabel in 1941, her father, at the age of 59, was unable to properly care for her. She moved in with her married older sister, who took over the responsibility of raising her. She first sang publicly in 1945, at the Jefferson City Junior College's graduation. She performed the song "Amor" and it was well received. After the positive response she received from the audience, she decided to pursue a singing career full-time.

Initially, she stayed within the parameters of the Kansas City area, working during the day as a stenographer and singing on weekends. Her first professional job was with the University of Missouri college band playing various functions in the Columbia area.[3] She moved between local bands from 1946–47; and, in 1948, she moved to New York City with the intention of having a glamorous career.

Unable to find a singing job, she became an office stenographer. She spent the next seven weeks trying to secure any kind of singing job. Those weeks were quite difficult for Connor, as she was kicked out of the hotel where she was staying (for failure to pay her bill), and the hotel kept all of her belongings (including her winter coat). She met a man acquainted with orchestra leader Claude Thornhill's road manager, Joe Green. Thornhill was seeking a new singer to round out his vocal group, the Snowflakes.

She successfully auditioned and joined Thornhill's group, touring around the United States and recording harmonies in the studio. Of her time spent with the Snowflakes, there is only evidence of her vocal contribution on two recorded songs: "There's a Small Hotel" and "I Don't Know Why", both performed in 1949. She continued to tour with the Thornhill band sporadically until March 1952, when she joined Jerry Wald's big band and recorded five songs: "You're the Cream in My Coffee", "Cherokee", "Pennies from Heaven", "Raisins and Almonds", and "Terremoto". She also reunited with Claude Thornhill in October 1952 for a radio broadcast from the Statler Hotel in New York City. She sang four songs: "Wish You Were Here", Come Rain or Come Shine", "Sorta Kinda", and "Who Are We to Say".[4]

In February 1953, when Connor was singing on a live radio broadcast from the Roosevelt Hotel, June Christy (then vocalist for Stan Kenton's band), was listening to the radio and heard her. By 1952, Kenton had rotated several female singers as replacements. In late 1952, Christy returned to the Kenton band for some sporadic engagements. When she informed Kenton again of her impending departure to pursue a solo career, she remembered Chris Connor and recommended her to Kenton.

Connor auditioned and began touring and recording for the Stan Kenton band in February 1953. On February 11, 1953, Connor recorded her first sides with the Stan Kenton band. Her first song, "And The Bull Walked Around, Ole", peaked at No. 30 on the Billboard music charts. Other songs recorded with the band were "Baia", "Jeepers Creepers", "If I Should Lose You", "I Get A Kick Out Of You", "Nobody Knows The Trouble I've Seen" and the song that would forever be associated with the vocalist, "All About Ronnie". Additional songs Connor sang on the road (but never recorded with the band in studio) were "Taking A Chance On Love", "Don't Worry About Me", "I'll Remember April" and "There Will Never Be Another You". On her live dates with the band, Thornhill often introduced her as "Chris Connors."

By June 1953, Connor found the constant traveling and vocal demands of nightly performances exhausting. She abruptly left the Kenton band; and, by fall of 1953, she was back in New York. She soon hired Monte Kay to manage her impending solo career, and he found work for her at Birdland. One night after a show, the owner of Bethlehem Records, Gus Wildi, offered her a recording contract on the spot.

She signed with the label in 1953 and, in 1954, released dual LPs, Chris Connor Sings Lullabys of Birdland and Chris Connor Sings Lullabys for Lovers. At age 26, she became a best-selling solo artist for Bethlehem Records; and the label rushed her into the studios to record additional songs. Bethlehem Records released the successful follow-up album Chris in 1955 (her only full-length 12" album release for the label before her departure). Bethlehem released her other full-length LPs This is Chris and Lullabys Of Birdland in 1957.

When time came for Connor's contract to expire in 1955, she signed for an album deal with Atlantic Records. Connor was the first white female jazz singer to be signed by the label. Ahmet Ertegun and his brother Nesuhi Ertegun's Atlantic label was, at the time, primarily a rhythm and blues label, with artists such as Ruth Brown and Ray Charles. Her Atlantic albums were always polished productions; and she was given free rein to choose her own songs, as well as the opportunity to work with any musicians she wished. During her Atlantic period (1956–62), Connor worked with some of the best producers, arrangers, and musicians in the jazz field.

When her last Atlantic album No Strings – An After Theatre Version was released in 1962, Connor decided not to renew her contract. Monte Kay had started his own record label and persuaded Connor to be the first artist signed. Her first album for FM, Chris Connor at the Village Gate (1963), although critically acclaimed, did not sell as well as her previous Bethlehem and Atlantic albums. Her second LP for FM, A Weekend in Paris (1964), was sent to radio stations but never commercially released because FM Records declared bankruptcy.

Connor spent the remainder of the 1960s and 1970s recording for various labels. On ABC/Paramount Records, she released Sings Gentle Bossa Nova in 1965 and Now! in 1966. A single album was released on the Japanese label JVC in 1969, Chris Connor Softly and Swinging. Further recordings were issued by Stanyan Records in 1971, Sony Japan in 1977, Progressive Records in 1978, and the Japanese Lobster Records in 1979.

Connor made her final recordings in the early 2000s, with three albums for HighNote Records. She released Haunted Heart in 2001. A session in April 2002 was released as Everything I Love in 2003 (as her final album). However, her last session a month later, May 17 and 19, 2002, came out sooner, as I Walk With Music in 2002.[5] The voice is at its darkest. The cover shows a distant, desolate silhouette at night walking on train tracks toward a tunnel.

Connor placed three songs into the popular music charts ("All About Ronnie" was a radio hit in 1953, but did not chart on Billboard).

Billboard Magazine reported in 1955 that Connor's first two solo albums for Bethlehem, Sings Lullabys of Birdland and Sings Lullabys for Lovers ranked #1 and #2 on the jazz charts for the week ending 04/23/55.[7] Both albums eventually sold more than 40,000 copies each, an impressive figure for a jazz singer at the time.[8] In 1957, she ranked #10 in the Favorite Female Vocalist disk jockey popularity poll, just behind Lena Horne and June Christy.[9] That same year, Elvis Presley ranked #10 in the male category.

During her one and only studio recording session with the Stan Kenton orchestra at Capitol Records in 1953, Chris Connor recorded the song Nobody Knows the Trouble I've Seen. It remains lost in their vaults.

Chris Connor recorded a number of non-album sides for Atlantic Records that were never released. These songs were housed in a warehouse in Long Branch, New Jersey. In February 1978, a warehouse fire destroyed many of Connor's Atlantic master tapes and alternate recordings as well as those from Atlantic's "golden age" and it is believed that most of these recordings are now lost.

This article uses material from the article Chris Connor from the free encyclopedia Wikipedia and it is licensed under the GNU Free Documentation License.