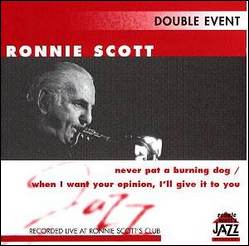 Ronnie Scott was born in Aldgate, East London, into a Jewish family.[1][2] His father Joseph Schatt was of Russian extraction and his mother Sylvia's family attended the Portuguese synagogue in Alie Street.[3][4][5] Ronnie Scott attended the Central Foundation Boys' School.[6]

Scott began playing in small jazz clubs at the age of 16, his claim to fame then being that he was taught to play by "Vera Lynn's father-in-law!". Scott toured with trumpeter Johnny Claes from 1944 to 1945, and with Ted Heath in 1946. He also worked with Ambrose, Cab Kaye and Tito Burns. Scott was involved in the short-lived musicians' co-operative Club Eleven band and club (1948–50), with Johnny Dankworth and others. He was a member of the generation of British musicians who worked on the Cunard liner Queen Mary (intermittently from 1946 to around 1950) in order to visit New York City and hear the new jazz music that was emerging directly. Scott was among the earliest British musicians to be influenced in his playing style by Charlie Parker and other bebop musicians.

In 1952, Scott joined Jack Parnell's orchestra, and from 1953 to 1956 led his own nine-piece group and quintet which featured among others Pete King, with whom he later opened his jazz club, Victor Feldman, Hank Shaw and Phil Seamen. Scott co-led The Jazz Couriers with Tubby Hayes from 1957 to 1959, and was leader of a quartet that included Stan Tracey (1960–67).

During this period Scott also did occasional session work; his best-known work here is the solo on The Beatles' "Lady Madonna". Scott also played on film scores, including the score for Fear Is the Key, composed by Roy Budd. Scott continued to be in demand for guest appearances in later years, such as providing the tenor sax solo on Phil Collins's 1981 hit single "I Missed Again".

From 1967–69, Scott was a member of The Kenny Clarke-Francy Boland Big Band, which toured Europe extensively and also featured fellow tenor players Johnny Griffin and Eddie "Lockjaw" Davis. At the same time Scott ran his own octet which included John Surman and Kenny Wheeler (1968–1969), and a trio with Mike Carr on keyboards and Bobby Gien on drums (1971–1975). Scott went on to lead various groups, most of which included John Critchinson on keyboards and Martin Drew on drums.

Scott's playing was much admired on both sides of the Atlantic. Charles Mingus said of him in 1961: "Of the white boys, Ronnie Scott gets closer to the negro blues feeling, the way Zoot Sims does."[7] Despite his central position in the British jazz scene, Scott recorded infrequently during the last few decades of his career. Scott suffered periods of depression and, while recovering slowly from surgery for tooth implants, died at the age of 69 from an accidental overdose of barbiturates prescribed by his dentist.[8]

The author Joel Lane was Scott's nephew. Ronnie Scott's widow, Mary Scott, has a business representing musicians and lives in Brooklyn, New York. She and her daughter, Rebecca Scott, have written a memoir, A Fine Kind of Madness: Ronnie Scott Remembered, with a foreword by Spike Milligan.[9] The book was published in 1999 in London by Headline Book Publishing.

Scott is perhaps best remembered for co-founding, with former tenor sax player Pete King, Ronnie Scott's Jazz Club, which opened on 30 October 1959 in a basement at 39 Gerrard Street in London's Soho district, with the debut of a young alto sax player named Peter King (no relation), before later moving to a larger venue nearby at 47 Frith Street in 1965.[10] The original venue continued in operation as the "Old Place" until the lease ran out in 1967, and was used for performances by the up-and-coming generation of domestic musicians.[11]

Scott regularly acted as the club's genial Master of Ceremonies, and was (in)famous for his repertoire of jokes, asides and one-liners. A typical introduction might go: "Our next guest is one of the finest musicians in the country. In the city, he's crap". Another memorable announcement was "Next week we're proud to have a quartet featuring Stan Getz and violinist Stuff Smith. It's called the 'Getz-Stuffed quartet'. Ronnie often used in later days the services of John Schatt to book Rock Bands for Ronnie Scott's upstairs.

After Scott's death, King continued to run the club for a further nine years, before selling the club to theatre impresario Sally Greene in June 2005.

In September 2013, while the club was being redecorated, a 12-metre-square hoarding was placed on the Frith Street façade as a tribute to its eponymous founder, bearing a giant photograph of Ronnie Scott by Val Wilmer, alongside one of his legendary one-liners: "I love this place, it's just like home, filthy and full of strangers."[12]

As well as participating in name orchestras, Scott led or co-led numerous bands featuring some of Britain's most prominent jazz musicians of the day.

On 7 April 1957, The Jazz Couriers, co-led by Tubby Hayes and Ronnie Scott, debuted at the new Flamingo Club in Wardour Street, Soho. The group lasted until 30 August 1959.

This article uses material from the article Ronnie Scott from the free encyclopedia Wikipedia and it is licensed under the GNU Free Documentation License.