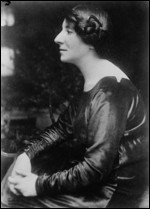 Wanda Alexandra Landowska (5 July 1879 16 August 1959) was a Polish (later a naturalized French citizen) harpsichordist whose performances, teaching, recordings and writings played a large role in reviving the popularity of the harpsichord in the early 20th century. She was the first person to record Johann Sebastian Bach's Goldberg Variations on the harpsichord (1931).

Landowska was born in Warsaw, where her father was a lawyer, and her mother a linguist who translated Mark Twain into Polish. She began playing piano at the age of four, and studied at the Warsaw Conservatory with the senior Jan Kleczyski and Aleksander Michaowski. She also studied composition under Heinrich Urban in Berlin, and had lessons in Paris with Moritz Moszkowski. After marrying the Polish folklorist Henry Lew in 1900 in Paris, she taught piano at the Schola Cantorum there (1900-1912).

She later taught harpsichord at the Berlin Hochschule für Musik (1912-1919). Deeply interested in musicology, and particularly in the works of Bach, Couperin and Rameau, she toured the museums of Europe looking at original keyboard instruments; she acquired old instruments and had new ones made at her request by Pleyel and Company. These were large, heavily built harpsichords with a 16-foot stop (a set of strings an octave below normal pitch) and owed much to piano construction. Responding to criticism by fellow Bach specialist Pablo Casals, she once said: "You play Bach your way, and I'll play him his way."[1]

A number of important new works were written for her: Manuel de Falla's El retablo de maese Pedro (Master Peter's Puppet Show) marked the return of the harpsichord to the modern orchestra. De Falla later wrote a harpsichord concerto for her, and Francis Poulenc composed his Concert champêtre for her.

She established the École de Musique Ancienne at Paris in 1925: from 1927, her home in Saint-Leu-la-Forêt became a center for the performance and study of old music.

When the German Army invaded France, Landowska, who was Jewish, fled with her assistant and domestic partner Denise Restout,[2] leaving Saint-Leu in 1940, sojourning in southern France, and finally sailing from Lisbon to the United States. She arrived in New York on 7 December 1941, a day which coincided with the bombing of Pearl Harbor. The house in Saint-Leu was looted, and her instruments and manuscripts stolen, so she arrived in the United States essentially without assets.[2]

She settled in Lakeville, Connecticut in 1949, and re-established herself as a performer and teacher in the United States, touring extensively. Her companion, Denise Restout, was editor and translator of her writings on music, including Musique ancienne, and Landowska on Music. She died at in Lakeville on 16 August 1959.[3]

A Camera Three series program entitled Reminiscences of Wanda Landowska aired 17 March 1963 on CBS.[4] It was a dramatization of some writings of Landowska as read by Agnes Moorehead.

This article uses material from the article Wanda Landowska from the free encyclopedia Wikipedia and it is licensed under the GNU Free Documentation License.

Somebody New Beat Kaestli
Update Required To play the media you will need to either update your browser to a recent version or update your Flash plugin.