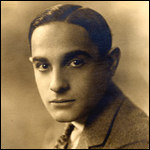 Lorenz Milton Hart (May 2, 1895 – November 22, 1943) was the lyricist half of the Broadway songwriting team Rodgers and Hart. Some of his more famous lyrics include "Blue Moon," "Mountain Greenery," "The Lady Is a Tramp," "Manhattan," "Where or When," "Bewitched, Bothered, and Bewildered," "Falling in Love with Love," "Have You Met Miss Jones?," "My Funny Valentine," "I Could Write a Book", "This Can't Be Love", "With a Song in My Heart", "It Never Entered My Mind", and "Isn't It Romantic?".

Hart was born in Harlem, the elder of two sons, to Jewish immigrant parents, Max M. and Frieda (Isenberg) Hart, of German background. Through his mother, he was a great-grandnephew of the German poet Heinrich Heine.[1] His father, a business promoter, sent Hart and his brother to private schools. (His brother, Teddy Hart, also went into theatre and became a musical comedy star. Teddy Hart's wife, Dorothy Hart, wrote a biography of Lorenz Hart.)[2]

Hart received his early education from Columbia Grammar School and then attended Columbia University School of Journalism for two years.[2][3] In 1919 a friend introduced him to Richard Rodgers, and the two joined forces to write songs for a series of amateur and student productions.[2]

By 1918, Hart was working for the Shubert brothers, partners in theatre, translating German plays into English.[2] In 1919, his and Rodgers' song "Any Old Place With You" was included in the Broadway musical comedy A Lonely Romeo. In 1920, six of their songs were used in the musical comedy Poor Little Ritz Girl, which also had music by Sigmund Romberg. They were hired to write the score for the 1925 Theatre Guild production The Garrick Gaieties, the success of which brought them acclaim.

Rodgers and Hart subsequently wrote the music and lyrics for 26 Broadway musicals during a more-than-20-year partnership that ended shortly before Hart's early death. Their "big four" were Babes in Arms, The Boys From Syracuse, Pal Joey, and On Your Toes. The Rodgers and Hart songs have been described as intimate and destined for long lives outside the theater.[4] Many of their songs are standard repertoire for singers and jazz instrumentalists. Notable singers who have performed and recorded their songs have included Frank Sinatra, Doris Day, Billie Holiday, Ella Fitzgerald, Blossom Dearie, and Carly Simon.[4] Hart has been called "the expressive bard of the urban generation which matured during the interwar years.".[2] But the "encomiums suggest(ing) that Larry Hart was a poet"[5] caused his friend and fellow writer Henry Myers to state otherwise. "Larry in particular was primarily a showman. If you can manage to examine his songs technically, and for the moment elude their spell, you will see that they are all meant to be acted, that they are part of a play. Larry was a playwright."[5]

Rodgers and Hart wrote music and lyrics for several films, including Love Me Tonight (1932), The Phantom President (1932), Hallelujah, I'm a Bum (1933), and Mississippi (1935).[3] With their successes, during the Great Depression Hart was earning $60,000 annually, and he became a magnet for many people. He gave numerous large parties. Beginning in 1938, he traveled more often and suffered from his drinking.[6] Nevertheless, Rodgers and Hart continued working together through mid-1942, with their final new musical being 1942's By Jupiter.

The New York Times, July 23, 1942, reported "The Theatre Guild announced yesterday that Richard Rodgers, Lorenz Hart and Oscar Hammerstein II will soon begin work on a musical version of Lynn Riggs's folk-play, 'Green Grow the Lilacs,' which the Guild produced for sixty-four performances at the Guild Theatre in 1931." The musical opened March 31, 1943 as "Oklahoma!" but Hart had exited, leaving Rodgers and his new partner Hammerstein as the composer and lyricist.

Hart, meanwhile, was much affected by his mother's death in late April 1943. Regrouping somewhat, Rodgers and Hart teamed a final time in the fall of 1943 for a revival of A Connecticut Yankee. Six new numbers, including "To Keep My Love Alive", were written for this reworked version of the play; it would prove to be Hart's last lyric. Hart had taken off the night of the opening and was gone for two days. He was found ill in a hotel room and taken to the hospital, but died within a few days.[2]

After Hart's death, Rodgers continued his collaboration with Oscar Hammerstein II. Theirs was a long and successful collaboration, one which made them one of the most successful composing teams of the 20th century.

According to Thomas Hischak, Hart "had a remarkable talent for polysyllabic and internal rhymes",[7] and his lyrics have often been praised for their wit and technical sophistication.

According to Stephen Holden, a writer in The New York Times, "Many of Hart's ballad lyrics conveyed a heart-stopping sadness that reflected his conviction that he was physically too unattractive to be lovable."[8] The New York Times writer also noted that "In his lyrics, as in his life, Hart stands as a compellingly lonely figure. Although he wrote dozens of songs that are playful, funny and filled with clever wordplay, it is the rueful vulnerability beneath their surface that lends them a singular poignancy."[4]

Hart lived with his widowed mother. He suffered from alcoholism, and would sometimes disappear for weeks at a time on alcoholic binges.[2]

Hart suffered from depression throughout his life. His erratic behavior was often the cause of friction between him and Rodgers and led to a breakup of their partnership in 1943 before his death. Rodgers then began collaborating with Oscar Hammerstein II.

Devastated by the death of his mother seven months earlier, Hart died in New York City of pneumonia from exposure on November 22, 1943, after drinking heavily.[9] His remains are buried in Mount Zion Cemetery in Queens County, New York.[10][11] The circumstances of his life were heavily edited and romanticized for the 1948 MGM biopic Words and Music.

This article uses material from the article Lorenz Hart from the free encyclopedia Wikipedia and it is licensed under the GNU Free Documentation License.