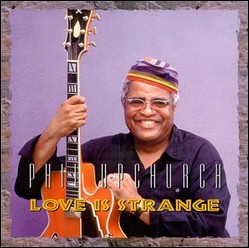 Upchurch started his career working with the Kool Gents, the Dells, and the Spaniels before going on to work with Curtis Mayfield, Otis Rush and Jimmy Reed. He then returned to Chicago to play and record with Woody Herman, Stan Getz, Groove Holmes, B.B. King, and Dizzy Gillespie.

In 1961, his record "You Can't Sit Down", by the Philip Upchurch Combo, sold over one million copies, and was awarded a gold disc.[2] In the 60s he toured with Oscar Brown, appearing on the 1965 live album, Mr. Oscar Brown, Jr. Goes to Washington. Returning from the Army in 1967, he recorded with Richard Evans, John Lee Hooker, Grover Washington, Jr.[3] and Cannonball Adderley. Upchurch was part of a group called the Soulful Strings during the 1960s, prior to working with Rotary Connection on Chess's Cadet label.

In the 1970s he worked with Ramsey Lewis, Quincy Jones and led his own quartet with Tennyson Stephens.[3] In the mid 1970s and 1980s, he performed with George Benson,[3] Mose Allison, Gary Burton, Lenny Breau,[4] Joe Williams, Natalie Cole, Carmen McRae, Cat Stevens and Michael Jackson.

In the 1990s he worked with Jimmy Smith and Jack McDuff.

His son is the drummer, Sean Rickman.

His wife, his seventh, is the actress Sonya Maddox.

This article uses material from the article Phil Upchurch from the free encyclopedia Wikipedia and it is licensed under the GNU Free Documentation License.

Love Me Like A Man Christine E. Jaccard & Dave Ruosch
Update Required To play the media you will need to either update your browser to a recent version or update your Flash plugin.