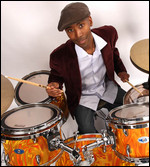 The group was formed in 1991 in Chicago, Illinois, United States, and was influenced by early electric blues of the 1950s.[1] They played locally in Chicago clubs, and went through several member changes in the 1990s, all the while recording ten albums[1] and a DVD.

This article uses material from the article Mississippi Heat from the free encyclopedia Wikipedia and it is licensed under the GNU Free Documentation License.

Wonderin' Blues Johnnie Bassett & The Blues Insurgents
Update Required To play the media you will need to either update your browser to a recent version or update your Flash plugin.