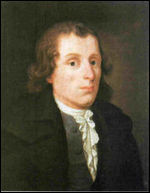 Andrea Luchesi was born at Motta di Livenza, near Treviso[1] the eleventh child of Pietro Luchese and Caterina Gottardi. The rather wealthy family descended from groups of noble families who had moved from Lucca to Venice in the 14th century (hence the name Luchese; from 1764/65 Andrea began to use the name Luchesi, which we can find written by his contemporaries also as Lucchesi, Lughesi, Luckesi, Lucchezzy, etc.). He grew up in his native town, receiving musical and general education from his elder brother Matteo, a priest, public tutor and organist.

By 1757[2] he moved to Venice. The protection of the nobleman Jseppo Morosini enabled him to study with eminent musicians: Gioacchino Cocchi, Padre Paolucci, Giuseppe Saratelli, Domenico Gallo, Ferdinando Bertoni and (the best-known of them) Baldassare Galuppi. His career in Venice developed quickly: examiner of the organists commission in 1761, then organist at San Salvatore (1764), composer of works for "organ or cembalo", instrumental, sacred and theatre music. He composed for official celebrations, the last (1771) being the solemn funeral of the Duke of Montealegre, Spanish ambassador to Venice. As a famous virtuoso he was invited to play organ in and outside Venice, e.g. was in charge of inaugurating the new organ of the basilica of Saint Anthony in Padua.[3]

In the spring of 1765 his opera L'isola della fortuna was performed at the Hoftheater in Vienna.

While on tour in Italy in 1771, Leopold and Wolfgang Mozart met Andrea Luchesi and received one of his concertos for cembalo (Wolfgang was still playing the concerto in 1777, while Leopold and Nannerl often used the concerto for teaching and practising purposes).[4]

At the end of 1771, Luchesi traveled to Bonn on a three-year contract, invited by the Prince Elector Archbishop of Cologne Maximilian Friedrich von Königsegg-Rothenfels, who wished to raise the quality level of his court orchestra. After the death of the previous Kapellmeister (Ludwig van Beethoven senior, i.e. the grandfather of Beethoven), Andrea Luchesi was nominated official court Kapellmeister in 1774.

He acquired the principality's citizenship and in 1775 married Anthonetta Josepha d'Anthoin, daughter of Maximilian Friederich's senior counselor. With the exception of a visit to Venice in 1783-84, he lived in Bonn until his death in 1801, although his role as Kapellmeister ended in 1794, when the French invasion troops suppressed the court.

The young Beethoven was at the court chapel from 1781 to 1792 as assistant organist, cembalo and viola player. Although Beethoven's musical and compositional training was probably influenced by Luchesi's presence, we have no evidence of any formal pupil/teacher relationship between the two.[3] When the court organist Christian Gottlob Neefe temporarily replaced the Kapellmeister as conductor and teacher during his 1783-84 absence, Luchesi assigned the organ service to the very young Beethoven. There is also no evidence of Luchesi's having taught other young Bonn musicians who went on to international renown: Antonin Reicha, Bernhard and Andreas Romberg, and Ferdinand Ries.

He had one daughter, who lived in Bonn till her death, and four sons. According to Neefe the first two sons (Maximilian Friederich, born 11 December 1775, and M. Jakob Ferdinand, born 18 December 1777) were gifted musicians.[5] Luchesi died on 21 March 1801 at the age of 59 in Bonn.

This article uses material from the article Andrea Luchesi from the free encyclopedia Wikipedia and it is licensed under the GNU Free Documentation License.

Hello Little Girl Count Basie Orchestra
Update Required To play the media you will need to either update your browser to a recent version or update your Flash plugin.