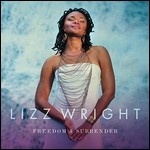 Wright was born in the small town of Hahira, Georgia, one of three children and the daughter of a minister and the musical director[1] of their church. She started singing gospel music and playing piano in church as a child, and also became interested in jazz and blues. She attended Houston County High School, where she was heavily involved in choral singing, receiving the National Choral Award. She went on to Georgia State University in Atlanta to study singing.[1]

Since then she has studied at The New School in New York,[2] and in Vancouver, BC.

Wright joined the Atlanta-based vocal quartet In the Spirit in 2000, and in 2002 she signed a recording contract with Verve Records, where her musical compositions and vocal style led her to be compared to that of Norah Jones.[1]

Her first album, Salt, was released in the spring of 2003[3] and reached No. 2 on the Billboard Top Contemporary Jazz chart in 2004. Her next release maintained the jazz and pop blend, while incorporating folk music.[1] Dreaming Wide Awake was released in June 2005[4] and reached No. 1 on the Top Contemporary Jazz chart in 2005 and 2006.

This article uses material from the article Lizz Wright from the free encyclopedia Wikipedia and it is licensed under the GNU Free Documentation License.

Why Should I Care Barbara Balzan
Update Required To play the media you will need to either update your browser to a recent version or update your Flash plugin.