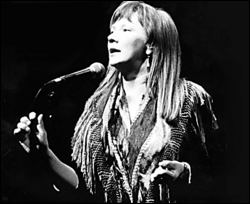 Mari Boine, previously known as Mari Boine Persen, née Mari Boine Olsen (born 8 November 1956) is a Norwegian Sami musician known for having added jazz and rock to the yoiks of her native people. Gula Gula (first released by Iut, 1989, later re-released by Real World) was her breakthrough release, and she continued to record popular albums throughout the 1990s.[1] In 2008, she was appointed Professor of musicology at Nesna University College.[2]

Boine was born and raised in Gámehisnjárga, a village on the river Anarjohka in Karasjok municipality in Finnmark, in the far north of Norway.[3]

Boine's parents were Sami. They made a living from salmon fishing and farming. She grew up steeped in the region's natural environment, but also amidst the strict Laestadian Christian movement with discrimination against her people: for example, singing in the traditional Sami joik style was considered 'the devil's work'. The local school that Boine attended reflected a very different world from her family's. All the teaching was in Norwegian.[4]

As Boine grew up, she started to rebel against the prejudiced attitude of being an inferior "Lappish" woman in Norwegian society. For instance, the booklet accompanying the CD 'Leahkastin' (Unfolding) is illustrated with photographs with racist captions like "Lapps report for anthropological measurement", "Typical female Lapp", "A well-nourished Lapp"; and it ends with a photo of Boine herself as a girl, captioned "Mari, one of the rugged Lapp-girl types" and attributed "(Photo: Unidentified priest)".[5]

When Boine's album Gula Gula was first released on Peter Gabriel's RealWorld label in July 1990, its front cover (see illustration) showed an iconic image of the tundra of the far north, the eye of a Snowy Owl. The front cover curiously did not show the name of the album, or the name or face of Mari Boine herself; the back cover printed the name 'Mari Boine Persen', the Persen surname identifying her as a Norwegian rather than a Sami.[6] On the 2007 release on her own Lean label,[7] the album cover explicitly names Mari Boine with her Sami surname, and shows her (see illustration) in full Sami costume as a shamanistic dancer of her own people, while the white background, like the Snowy Owl of the original release, hints at the snows of the north.

Boine was asked to perform at the 1994 Winter Olympics in Lillehammer, but refused because she perceived the invitation as an attempt to bring a token minority to the ceremonies.[8]

Boine's songs are strongly rooted in her experience of being in a despised minority. For example, the song 'Oppskrift for Herrefolk' (Recipe for a Master Race) on her breakthrough CD 'Gula Gula', sung in Norwegian unlike the rest of the songs which are in Sami, speaks directly of 'discrimination and hate', and ironically recommends ways of oppressing a minority: "Use bible and booze and bayonet"; "Use articles of law against ancient rights".[9]

Boine's other songs are more positive, often singing of the beauty and wildness of Sapmi (Lapland). The title track of 'Gula Gula' asks the listener to remember 'that the earth is our mother'.[10]

Rootsworld, interviewing Boine in 2002, described her as "an unofficial Sami cultural ambassador".[12]

The Guardian, in its 2010 F&M playlist of songs "they just can't turn off", describes My Friend of Angel Tribe with the words "Norwegian Sami singer Boine, with this soft, melancholy and utterly mesmerising song."[13]

Johnny Loftus, reviewing Boine's Eight Seasons, wrote that "Boine seems to have been inspired, collaborating with producer Bugge Wesseltoft for a collection of pieces weaving her alternately supple and intimate, angry and otherworldly vocals into moody arrangements tinged with jazz influence and electronic programming."[14] While there was a degree of cliche in that, wrote Loftus, it worked well, concluding: "Boine's voice, filtered at first behind the halting notes of a guitar, builds in strength over the brooding electronic rhythm, until her Joik overtakes the electronics completely, becoming fully responsible for the song's deep, chilly atmosphere. Let's see a keyboard's hard drive do that."[14]

In 2003, Boine was awarded the Nordic Council Music Prize. She was appointed knight, first class in the Royal Norwegian Order of St. Olav for her artistic diversity on September 18, 2009.[15] On 7 October 2012, Boine was appointed as a "statsstipendiat", an artist with national funding, the highest honour that can be bestowed upon any artist in Norway.[16]

Boine has received other awards as follows:

Bonus tracks on the 2003 remastered reissue:

Soundtrack from the film Kautokeino-opprøret.

This article uses material from the article Mari Boine from the free encyclopedia Wikipedia and it is licensed under the GNU Free Documentation License.

Back To You Chamber Soul
Update Required To play the media you will need to either update your browser to a recent version or update your Flash plugin.