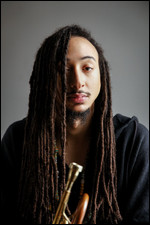 Theo Croker, or Theodore Lee Croker (born July 18, 1985), is a jazz trumpeter, singer, and bandleader from Leesburg, Florida. He attended Oberlin College and is the grandson of Grammy Award winning trumpeter Doc Cheatham.[1]

Born and raised in Leesburg, Florida on July 18, 1985, Theo first picked up a trumpet at age eleven after a visit to New York City where he heard his grandfather play at Sweet Basil. At age 92, Doc died the following year, but Theo continued to listen to his recordings. “I would just sit in my room and play my trumpet for hours without knowing what I was doing,” Theo says. “I would slowly teach myself new notes and play along with recordings of my grandfather and other greats. I noticed that I could fit in with what I was hearing harmonically.” It was at a memorial service for his grandfather, when he had his first chance to perform for jazz-savvy audience. “I was only twelve years old, but the way the music touched people and the way it made me feel was enough to set me for life. I knew it was what I wanted to do.”

After high school, Theo had his pick of the country’s finest music schools, but the great Donald Byrd, the multi-Grammy® Award winning composer and recording artist inspired him to go to the Oberlin Conservatory in Oberlin, Ohio. Jazz legends like Gary Bartz, Robin Eubanks, Billy Hart, Wendell Logan, Marcus Belgrave, and Dan Wall also taught at Oberlin. “I didn’t want to study with teachers, once I knew I could study with actual players, active jazz legends. That made the call for me,” Theo says. After graduating from Oberlin in 2007, Theo began his postgraduate education, hanging out and playing with older musicians like Benny Powell, Jimmy and Tootie Heath, Billy Hart, and Marcus Belgrave. “They taught me how to live my life. Things not to do that they did, and things to do that they didn’t,” he explains.

Theo received the Presser Music Foundation Award in the spring of 2006. He used the grant money to record his first album, The Fundamentals, in New York City with The Theo Croker Sextet. The band’s members were all in their early twenties and each as impressive as the next; they define the ambitious and highly skilled lions of their generation.

Theo has been acclaimed by several peers in the music scene. Donald Byrd praises Theo’s musicianship: “There are good, great and nice musical players, but then there are phenomenal instrumentalists, such as Theo. I would place Theo in a class of musicians who will redirect the flow, change and alter the current of today’s New Jazz. Theo has the ability and the intelligence to challenge the direction of Nu Music. Theo is one of today’s titans. He is a Sankofa.”

Marcus Belgrave says, “Theo Croker is one of the most promising and creative trumpeters on the horizon today and is also one of the most energetic artists I have ever encountered.”

“He has the tools, the intelligence, the ability and the talents,” praises Wynton Marsalis. “The future looks bright for Croker.”

Theo recently returned to the United States after a seven-year stay in Shanghai, China. The experience pushed him to broaden his idea of jazz to encompass other genres (including salsa, fusion/rock, blues, etc.), as all Shanghai musicians have to. During his time there, Theo held a five-month residency at Shanghai’s “House of Blues and Jazz,” and was soon after hired as the house band for Asia Uncut Star Network–a late night television show modeled on the Tonight Show–where Theo served as the bandleader and in-house composer until mid-2010.

It was in Shanghai where Theo met and performed for the first time with vocal icon Dee Dee Bridgewater, who performs on and produced his upcoming album, AfroPhysicist. Available May 20 on DDB Records via Sony Music Masterwork’s OKeh imprint, the album serves as the first release on Bridgewater’s label by anyone other than herself since its inception in 1996.

Theo Croker was exposed to jazz music early in life as the grandson of a jazz legend. He attended Douglas Anderson School of the Arts in Jacksonville, Florida, and attended Oberlin College in 2003. He graduated from Oberlin in 2007 and soon released his first album. At Oberlin, Croker studied under such legendary jazz musicians as Wendell Logan, Donald Byrd, Marcus Belgrave, Gary Bartz, Robin Eubanks, Dan Wall, and Billy Hart and several other well known jazz recording artists while studying for his degree at Oberlin College.[2] He received the Presser Music Foundation Award in 2007 which allowed him to finance his first album entitled The Fundamentals. He graduated from Oberlin College in 2007 and promoted his first album which was well received. In 2009 he finished his second album, In The Tradition, which received rave reviews from well-known jazz writer and Village Voice editor Nat Hentoff, who compared his work to Count Basie and Buck Clayton.

6. SAVE YOUR LOVE FOR ME (FEAT. DEE DEE BRIDGEWATER)

This article uses material from the article Theo Croker from the free encyclopedia Wikipedia and it is licensed under the GNU Free Documentation License.