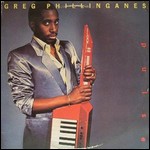 Gregory Arthur "Greg" Phillinganes (born May 12, 1956) is an American keyboardist, singer-songwriter, and musical director based in Los Angeles, California, U.S. A prolific session musician, Phillinganes has contributed keyboard tracks to numerous albums representing a broad array of artists and genres. He has toured with notable artists, such as Stevie Wonder, Eric Clapton, David Gilmour and Toto, served as musical director for Michael Jackson, and has released two solo studio albums.

Gregory Arthur Phillinganes was born on May 12, 1956, in Detroit, Michigan.[1] He began playing a neighbor's piano by ear at the age of two, beginning lessons a few years later after his mother purchased a piano for him.[2] He took lessons from two different instructors before his mother brought him to Misha Kotler, a Detroit Symphony Orchestra pianist who introduced the discipline and technique Phillinganes required to excel. Phillinganes credits Kotler with showing him proper hand posture and for influencing him to play with "a sense of dexterity and definition".[2]

Phillinganes was discovered by Stevie Wonder after drummer Ricky Lawson gave him a cassette of instrumental renditions of his own songs done by Phillinganes. Phillinganes auditioned for Wonder's band, Wonderlove, and subsequently played with them from 1976 to 1981.[2]

The year 1978 began a three-decade-long involvement with Michael Jackson and The Jacksons for Phillinganes. He arranged The Jacksons' 1978 album Destiny and played keyboard on the 1980s Triumph album.[3] In the process, he became close with the Jackson family, accompanying them to Walt Disney World and referring to Katherine Jackson as "mom".[4] He contributed to every one of Michael Jackson's solo albums, and cites the title track from 1982's Thriller as a classic example of his work. In an interview with Atlanta, Phillinganes recalled, "I did the synth bass part, those high-pitched synth parts, I did the Rhodes [keyboard] part and even did the pipe organ that Vincent Price does his rap over. It was crazy! When I listen to it now, I just think about all the fun we had creating all those layers in the studio."[3] Although paid as a session musician for his contributions to Thriller, the best-selling album of all time,[5] Phillinganes furiously noted that he and the other participating musicians do not receive royalties.[4] He was the musical director for Michael Jackson's Bad and Dangerous concert tours, as well as the Michael Jackson: 30th Anniversary Special. He describes his involvement with the 30th Anniversary Special as particularly emotional considering his long history with the family. Phillinganes has spoken at length about how much of his life he had spent with the Jacksons, and Michael in particular.[4]

In 1981, Phillinganes released his first solo album, Significant Gains.[6] The Boston Globe reviewer Richard Cromonic noted that Stevie Wonder's influence on the album's sound is pronounced, and praised the creativity of the compositions. He criticized the lyrics as being less creative, and said that Significant Gains might be too close to Wonder's sound, calling it "blatant emulation".[7] While the album itself was not very successful, the song "Baby, I Do Love You" was a minor R&B hit.[8] Three years later, Phillinganes released his follow-up album Pulse, which featured another minor hit (and perhaps his best-known solo hit), a cover of Yellow Magic Orchestra's song "Behind the Mask" (with additional lyrics written by Michael Jackson). This single was more successful on the dance music charts.[8] When he later joined Eric Clapton's backing band, Phillinganes introduced the tune to Clapton, who covered it on his 1986 August album. Amidst his solo recordings and touring with Clapton throughout the 1980s and the early 1990s, he became well known as a prominent session musician for a multitude of different artists, performing on many hit albums of the time. His session work has continued into the present.[2]

In addition to Stevie Wonder, Greg Phillinganes has worked and toured with other musicians including the Bee Gees, Donna Summer, Anita Baker, George Benson, Karen Carpenter, Eric Clapton, Donald Fagen, Aretha Franklin, Patti LaBelle, Michael Jackson, Richard Marx, Paul McCartney, Al Jarreau, Quincy Jones, and Stevie Nicks among others.[9][10] In 1995 he played on the Joan Armatrading album What's Inside. Starting in 2005, Phillinganes filled in for the semi-retired David Paich on tour with the band Toto. He subsequently became a full-time member of the band and contributed to their album Falling In Between. He continued to tour as a member of Toto until the band became inactive in 2008. When Toto reformed in 2010 to resume touring and working on new material, Phillinganes had been replaced in the lineup by original keyboardist Steve Porcaro.[11]

Phillinganes served as the musical director for Cirque du Soleil's Michael Jackson: The Immortal World Tour for its entire run from 2011–2014.[3] Phillinganes was Musical Director for the 2014 Women of Soul performance at The Whitehouse featuring, amongst others Aretha Franklin, Patti LaBelle, Ariana Grande and Jill Scott.[12] In 2014 and 2015 he performed with Stevie Wonder again in the Songs in the Key of Life Tour, also serving "as the tour's Music Director." [13] He toured with the European leg of David Gilmour's Rattle That Lock tour.[14]

Phillinganes "won a 2015 Creative Arts Emmy Award for Outstanding Music Direction for his role as musical director for the television special "Stevie Wonder: Songs In The Key Of Life"[15] and was music director for the 2016 Grammy Awards.[16]

This article uses material from the article Greg Phillinganes from the free encyclopedia Wikipedia and it is licensed under the GNU Free Documentation License.