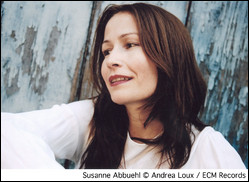 As a child she got lessons in harpsichord, playing baroque music. At the age of 17 she went to Los Angeles[1] where she went to a high school attending music lessons on a daily basis, being part of an ensemble that toured the US and Canada. She then studied at the Royal Conservatory of The Hague,[1] Netherlands (among others with Jeanne Lee[2] and Rachel Gould ) earning a master's degree in performance and pedagogy. She also became a student of famed Indian classical singer and composer Prabha Atre in Mumbai. Abbuehl studied composition with Dutch composer Diderik Wagenaar.

In 2001, her album April was released by ECM Records[2] and won an Edison award (Dutch Grammy). She tours with her band and other jazz musicians in Europe, North America and Africa, playing in Montreal, Maputo, Cape Town, Rome, Paris, Zurich, Oslo, and other European cities. In May 2006, album Compass was released on ECM (with Michel Portal).

In her work, influences of classical music can be found. Her artistic identity is characterized by minimal instrumentation and arrangements and can be described as chamber jazz.

Abbuehl is professor of jazz voice and ensemble at Lucerne University of Applied Sciences and Arts as well as at the HEMU Lausanne. She has taught master classes throughout Europe.

In 2013, her radio play Der Gaukler Tag was nominated for the Prix Marulic.

This article uses material from the article Susanne Abbuehl from the free encyclopedia Wikipedia and it is licensed under the GNU Free Documentation License.

By Chance Dee Bell
Update Required To play the media you will need to either update your browser to a recent version or update your Flash plugin.