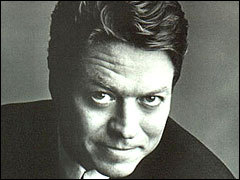 Robert Allen Palmer (19 January 1949 26 September 2003), born in Batley, Yorkshire, was a Grammy Award-winning English singer-songwriter.[1] He was known for his distinctive voice and the eclectic mix of musical styles on his albums, combining soul, jazz, rock, pop, reggae and blues. He found success both in his solo career and in the supergroup Power Station, and had Top 10 songs in both the US and the UK. His iconic music videos for the hits "Simply Irresistible" and "Addicted to Love", featured identically dressed dancing women with pale faces, dark eye makeup and bright red lipstick, which resembled the women in the art of Patrick Nagel, an artist popular in the 1980s.[1] Sharp-suited, his involvement in the music industry commenced in the 1960s, covered five decades and included a spell with Vinegar Joe.[1][2]

Palmer's father was a British naval intelligence officer stationed in Malta. Palmer moved with his family to Scarborough, Yorkshire in 1959. Influenced as a child by blues, soul and jazz music on American Forces Radio, Robert Palmer joined his first band, The Mandrakes, at the age of 15 while still at Scarborough Boys' High School. His first major break came with the departure of singer Jess Roden from the band The Alan Bown Set in 1969, after which Palmer was invited to London to sing on their single "Gypsy Girl".[3] The vocals for the album The Alan Bown!, originally recorded by Roden (and released in the US that way), were re-recorded by Palmer after the success of the single.

Island Records signed Palmer to a solo deal in 1974.[2] His first solo album Sneakin' Sally Through the Alley recorded in New Orleans, Louisiana in 1974, was heavily influenced by the music of Little Feat and the funk fusion of The Meters who acted as backing band along with producer/guitarist Lowell George of Little Feat.[3] Although unsuccessful in the UK, both the album and single reached the Top 100 in the US.[3] Notably, "Sailin' Shoes" (the album's first track), Palmer's own "Hey Julia" and the Allen Toussaintpenned title track carry virtually the same rhythm, and were packaged on the album as a "trilogy" without a pause between them.

Subsequently relocating from London to New York with his wife, Palmer released Pressure Drop in November 1975 (featuring Motown bassist James Jamerson).[3] An album infused with his interests in reggae and rock music,[2] it was noted for its cover art of a nude girl on a balcony rather than any commercially successful songs. He toured with Little Feat to promote that album.[3]

However, with the failure of the follow-up Some People Can Do What They Like, Palmer decided to move to Nassau, Bahamas, directly across the street from Compass Point Studios.[3]

In 1978, he released Double Fun, a collection of Caribbean-influenced rock, including a cover of "You Really Got Me". The album reached the Top 50 on the US Billboard chart and scored a Top 20 single with the Andy Fraserpenned "Every Kinda People".[3] The song has been covered by other artists including Chaka Demus and Pliers, Randy Crawford and Amy Grant. It reached #16 on the Billboard Hot 100.[3]

The 1980s saw 'Compass Point Star' Palmer find an increasing amount of commercial success. The album Clues, produced by Palmer and featuring Chris Frantz and Gary Numan, generated hits on both sides of the Atlantic, first with the radio-friendly single "Johnny and Mary" and then "Looking for Clues".[3] Catchy music videos matching the synth pop stylings of New Wave gave him much needed exposure to a younger audience. The success was repeated with the 1982 EP release of Some Guys Have All the Luck.[3]

In April 1983 Pride was released, which not as commercially successful as Clues did feature the title song and Palmer's cover of The System's "You Are In My System", with The System's David Frank contributing keyboard tracks to the latter song.[3] On 23 July, Palmer performed at Duran Duran's charity concert at Aston Villa football ground 1983 where he struck up friendships with members of Duran Duran that in late 1984 spawned the supergroup Power Station.

Duran Duran went on hiatus, and their guitarist Andy Taylor and bassist John Taylor joined former Chic member Tony Thompson and Palmer to form Power Station.[2] Their eponymous album, recorded mainly at the New York recording studio for which the band was named, with overdubs and mixing at Compass Point Studios in Nassau, Bahamas, reached the Top 20 in the UK and the Top 10 in the US. It spawned two hit singles with "Some Like It Hot" (US #6) and a cover of the T.Rex song "Get It On (Bang a Gong)", which peaked one position higher than the original at US #9. Palmer performed live with the band only once that year, on Saturday Night Live. The band toured, and played Live Aid, with singer Michael Des Barres after Palmer bowed out at the last moment to go back into the recording studio to further his solo career.

Palmer recorded the album Riptide at Compass Point Studios in 1985, recruiting Thompson and Andy Taylor to play on some tracks plus Power Station record producer Bernard Edwards, who worked with Thompson in Chic, to helm the production. Riptide featured the US #1 single "Addicted to Love". The single was accompanied by a memorable and much-parodied music video, directed by Terence Donovan, in which Palmer is surrounded by a bevy of near-identically clad, heavily made-up female "musicians," either mimicking or mocking the painting of Patrick Nagel.[3] In 1987, he won the Grammy Award for Best Male Rock Vocal Performance for "Addicted to Love".

The singles "Hyperactive" and his cover of Cherrelle's "I Didn't Mean to Turn You On" also performed well, with the latter being a #2 US and #9 UK hit single.[3] Another song, "Trick Bag," was written by one of his major influences, New Orleans jazz artist Earl King.

Concerned about the rising crime rate in Nassau, Palmer moved to Lugano, Switzerland, in 1987 and set up his own recording studio.[2] Producing Heavy Nova in 1988, Palmer again returned to experimenting, this time with bossa nova rhythms, heavy rock and white-soul balladeering. He repeated his previous success of "Addicted to Love" with the video of "Simply Irresistible", again with a troupe of female "musicians". The song reached #2 in the US and was Palmer's final Top Ten hit there. The ballad "She Makes My Day" also proved to be a hit in the UK, peaking at #6.[3] In 1989, he won a second Grammy for "Simply Irresistible",[5] which would later be featured in the Tony Award winning musical Contact. Rolling Stone magazine voted Palmer the best-dressed rock star for 1990.

Palmer expanded his range even further for his next album, Don't Explain (1990). It also featured the Bob Dylan penned Top 10 single "I'll Be Your Baby Tonight", in a collaboration with UB40, that secured a #6 placing in the UK, and the Top-20 Marvin Gaye cover "Mercy Mercy Me". Throughout the 1990s, Palmer ventured further into diverse material. The 1992 album Ridin' High was a tribute to the Tin Pan Alley era.[2][3]

In 1994, Palmer released Honey to mixed reviews. While the album failed to produce any hit singles in the US, he did find success in the UK with the release of three modest hit singles "Girl U Want", "Know By Now" and "You Blow Me Away".[3]

In 1995, Palmer reunited with other members of The Power Station to record a second album. Bassist John Taylor eventually backed out of the project, to be replaced by Bernard Edwards. Palmer and the rest of the band completed the album Living in Fear (1996), and had just begun touring when Edwards died from pneumonia.

Palmer's favourite author was Jack Vance and he was especially fond of Cugel. Jack Vance paid homage to Palmer in his novel Night Lamp, whose first lines are: "Toward the far edge of the Cornu Sector of Ophiuchus, Robert Palmer's Star shone brilliant white, its corona flaring with films of blue, red and green colour."

Palmer and his first wife had three children. Palmer and his second wife wife, Sue, had two children, James and Jane, who were born in 1979 and 1980 respectively.[6] The couple divorced in 1993.[7] Also in 1993, Palmer relocated from the Bahamas to a converted mill-house in Lugano, Switzerland after he found that the islands had become overrun with drugs and guns and were no longer safe.[7] Palmer's companion at the time of his death was Geraldine Edwards.[6][7]

Palmer, who made his home in Lugano, Switzerland, for his last 15 years, was in Paris, France when he died of a sudden heart attack on 26 September 2003. He was 54 years old. He is interred at the cemetery in Lugano.

In October 2004, newspapers reported on the struggle for Palmer's estate, worth an estimated £30 million ($46 million), between Mary Ambrose and Palmer's five children. Ambrose claimed Palmer had changed his will to favour Ambrose.[8] According to commentators at AbsoluteRadio.co.uk, the courts denied Ms Ambrose's claim as without merit and gave her only $20,000 in compensation with the remainder of the estate divided amongst Palmer's five children.[9]

On her All The Best compilation album, Palmer's Switzerland neighbour Tina Turner added a live version of "Addicted to Love" in tribute to him.

This article uses material from the article Robert Palmer (singer) from the free encyclopedia Wikipedia and it is licensed under the GNU Free Documentation License.

Some Of These Days Erich Nussbaum & Flavia Vasella
Update Required To play the media you will need to either update your browser to a recent version or update your Flash plugin.