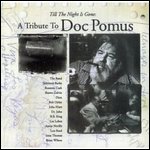 Born Jerome Solon Felder in 1925 in Brooklyn, New York, he was the son of Jewish immigrants.[5] Felder became a fan of the blues after hearing a Big Joe Turner record. Having had polio as a boy, he walked with the help of crutches. Later, due to post-polio syndrome, exacerbated by an accident, Felder eventually relied on a wheelchair.

Using the stage name "Doc Pomus", teenager Felder began performing as a blues singer. His stage name was not inspired by anyone in particular; he just thought it sounded better for a blues singer than the name Jerry Felder. Pomus stated that more often than not, he was the only Caucasian in the clubs, but that as a Jew and a polio victim, he felt a special "underdog" kinship with African Americans, while in turn the audiences both respected his courage and were impressed with his talent. Gigging at various clubs in and around New York City, Pomus often performed with the likes of Milt Jackson, Mickey Baker and King Curtis. Pomus recorded approximately 40 sides as a singer in the '40s and '50s for record companies such as Chess, Apollo, Gotham and others.

In the early 1950s, Pomus started writing magazine articles as well as songwriting for artists such as Lavern Baker, Ruth Brown, Ray Charles and Big Joe Turner to earn more money to support a family, after he had married Willi Burke, a Broadway actress. His first big songwriting break came when he chanced upon the Coasters' version of his "Young Blood" on a jukebox while on honeymoon. Pomus wrote the song, then gave it to Jerry Leiber and Mike Stoller, who radically rewrote it. Still, Pomus had co-credit as author, and he soon received a royalty check for $2,500 (US$21,783 in 2017 dollars[6]), which convinced him that songwriting was a career direction worth pursuing. By 1957, Pomus had given up performing for full-time songwriting. He collaborated with pianist Mort Shuman, whom he met when Shuman was dating Pomus's younger cousin, to write for Hill & Range Music Co./Rumbalero Music at its offices in New York City's Brill Building. Pomus asked Shuman to write with him because Pomus didn't then know much about rock and roll, whereas Shuman was familiar with many popular artists of the day. Their songwriting efforts had Pomus write the lyrics and Shuman the melody, although often they worked on both. They wrote the hit songs "A Teenager in Love", "Save The Last Dance For Me", "Hushabye", "This Magic Moment", "Turn Me Loose", "Sweets For My Sweet" (a hit for The Drifters and then The Searchers), "Go Jimmy Go", "Little Sister", "Can't Get Used to Losing You", "Suspicion", "Surrender" and "(Marie's the Name) His Latest Flame".

During the late 1950s and early 1960s, Pomus wrote several songs with Phil Spector ("Young Boy Blues"; "Ecstasy"; "What Am I To Do?"), Mike Stoller and Jerry Leiber ("Young Blood" and "She's Not You"), and other Brill Building-era writers. Pomus also wrote "Lonely Avenue", a 1956 hit for Ray Charles.[7]

In the 1970s and 1980s, in his eleventh-floor, two-room apartment at the Westover Hotel at 253 West 72nd Street, Pomus wrote songs with Dr. John, Ken Hirsch and Willy DeVille for what he said were "...those people stumbling around in the night out there, uncertain or not always so certain of exactly where they fit in and where they were headed." These later songs ("There Must Be A Better World", "There Is Always One More Time", "That World Outside", "You Just Keep Holding On", and "Something Beautiful Dying" in particular)—recorded by Willy DeVille, B.B. King, Irma Thomas, Marianne Faithfull, Charlie Rich, Ruth Brown, Dr. John, James Booker, and Johnny Adams—are considered by some, including writer Peter Guralnick, musician and songwriter Dr. John, and producer Joel Dorn, to be signatures of his best craft.

Together with Shuman and individually, Pomus was a key figure in the development of popular music. They co-wrote such hits as "Save the Last Dance for Me", "This Magic Moment", "Sweets for My Sweet", "Viva Las Vegas", "Little Sister", "Surrender", "Can't Get Used to Losing You", "Suspicion", "Turn Me Loose" and "A Mess of Blues".[8]

This article uses material from the article Doc Pomus from the free encyclopedia Wikipedia and it is licensed under the GNU Free Documentation License.

Noreens Nocturne Alex Felix Jazz Club
Update Required To play the media you will need to either update your browser to a recent version or update your Flash plugin.