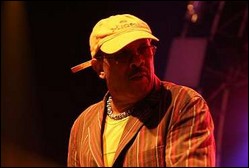 Roy Ayers (born September 10, 1940) is an American funk, soul, and jazz composer and vibraphone player.[1] Ayers began his career as a post-bop jazz artist, releasing several albums with Atlantic Records, before his tenure at Polydor Records beginning in the 1970s, during which he helped pioneer jazz-funk.[2] He is a key figure in the acid jazz movement, which is a mixture of jazz into hip-hop and funk,[3] and has been dubbed by many as "The Godfather of Neo Soul".[4] He is most well known for his signature compositions "Everybody Loves The Sunshine" and "Searchin",[5] and is also famous for having more sampled hits by rappers than any other artist.[6]

Ayers was born in Los Angeles, and grew up in a musical family, where his father played trombone and his mother played piano.[7][8] At the age of five, he was given his first pair of vibraphone mallets by Lionel Hampton. The area of Los Angeles that Ayers grew up in, South Park (later known as South Central) was the epicenter of the Southern California Black music scene. The schools he attended (Wadsworth Elementary, Nevins Middle School, and Thomas Jefferson High School) were all close to the famed Central Avenue, Los Angeles' equivalent of Harlem's Lenox Avenue and Chicago's State Street. Roy would likely have been exposed to music as it not only emanated from the many nightclubs and bars in the area, but also poured out of many of the homes where the musicians who kept the scene alive lived in and around Central. During high school, Ayers sang in the church choir[9] and fronted a band named The Latin Lyrics, in which he played steel guitar and piano.[10] His high school, Thomas Jefferson High School, produced some of the most talented new musicians, such as Dexter Gordon.

Ayers started recording as a bebop sideman in 1962 and rose to prominence when he dropped out of City College[11] and joined jazz flutist Herbie Mann in 1966.[12]

In the early-1970s, Roy Ayers started his own band called Roy Ayers Ubiquity, a name he chose because ubiquity means a state of being everywhere at the same time.[13]

Ayers was responsible for the highly regarded soundtrack to Jack Hill's 1973 blaxploitation film Coffy, which starred Pam Grier. He later moved from a jazz-funk sound to R&B, as seen on Mystic Voyage, which featured the songs "Evolution" and the underground disco hit "Brother Green (The Disco King)", as well as the title track from his 1976 album Everybody Loves the Sunshine.

In 1977, Ayers produced an album by the group RAMP, Come into Knowledge. That fall, he had his biggest hit with "Running Away".

In late 1979, Ayers scored his only top ten single on Billboard's Hot Disco/Dance chart with "Don't Stop The Feeling", which was also the leadoff single from his 1980 album No Stranger to Love, whose title track was sampled in Jill Scott's 2001 song "Watching Me" from her debut album Who Is Jill Scott?

In the late-1970s, Ayers toured in Nigeria for six weeks with Afrobeat pioneer Fela Kuti, one of the Africa's most recognizable musicians.[14] In 1980, Phonodisk released Music of Many Colors in Nigeria, featuring one side led by Ayers' group and the other led by Africa '70.[7][15]

In 1981, Ayers produced an album with the singer Sylvia Striplin, Give Me Your Love (Uno Melodic Records, 1981).[7] In the same year, 1981, he also produced a second album called Africa, Center of the World on Polydor records along with James Bedford and Ayers's bass player William Henry Allen. Allen can be heard talking to his daughter on the track "Intro/The River Niger". The album was recorded at the Sigma Sound Studios, New York.

Ayers performed a solo on John "Jellybean" Benitez's production of Whitney Houston's "Love Will Save The Day" from her second multi-Platinum studio album Whitney. The single was released in July 1988 by Arista Records.

Ayers has played his live act for millions of people across the globe, including Japan, Australia, England and other parts of Europe.[16]

Ayers is known for helping to popularize feel good music in the 1970s, stating that "I like that happy feeling all of the time, so that ingredient is still there. I try to generate that because it's the natural way I am".[17] The types of music that he used to do this consisted of funk, salsa, jazz, rock, soul and rap.[18]

In 1992, Ayers released two albums, Drive and Wake Up, for the hip-hop label Ichiban Records.[7] and also collaborated with Rick James for an album and is quoted to have been a very close friend of his.[19]

In 1993, he appeared on the record Guru's Jazzmatazz Vol.1 featuring on the vibraphone in the song "Take a Look (At Yourself)" and the following year appeared on the Red Hot Organization's compilation album Stolen Moments: Red Hot + Cool. The album, meant to raise awareness and funds in support of the AIDS epidemic in relation to the African-American community, was heralded as "Album of the Year" by Time Magazine.

During the 2000s and 2010s, Ayers ventured into house music, collaborating with such stalwarts of the genre as Masters at Work and Kerri Chandler.

He has also worked in collaborations with soul songstress Erykah Badu and other artists on his 2004 album Mahogany Vibes.[21]

In 2017, he appeared on Tyler, The Creator's new album "Flower Boy" on the track Pothole featuring Jaden Smith.

A documentary the Roy Ayers Project featuring Ayers and a number hip hop producers who have sampled his music and other people who have been influenced by him and his music has been in development for a number of years.[23]

Pharrell Williams cites Roy Ayers as one of his key musical heroes.[24]

Ayers is a recipient of the Congress of Racial Equality Lifetime Achievement Award.[25]

This article uses material from the article Roy Ayers from the free encyclopedia Wikipedia and it is licensed under the GNU Free Documentation License.

Bird Watching Sam Burckhardt
Update Required To play the media you will need to either update your browser to a recent version or update your Flash plugin.