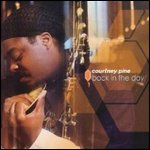 Courtney Pine CBE (born 18 March 1964, London) is an English jazz musician. At school he studied the clarinet, although he is known primarily for his saxophone playing. Pine is a multi-instrumentalist, also playing the flute, clarinet, bass clarinet and keyboards. On his 2011 album, Europa, he plays almost exclusively bass clarinet.[1]

His recent music integrates modern British music like drum and bass and UK garage with contemporary jazz styles. He runs his own band and integrates many contemporary musicians in his performances. He also presents Jazz Crusade on BBC Radio 2, the seventh series of which was broadcast during spring 2007.

In 1988 he appeared as himself in a jazz quartet in the Doctor Who serial Silver Nemesis.

Pine appeared in August 2008 as an advocate for Pierre Boulez, on the BBC World News classical music programme, Visionaries.[4]

Pine's parents were Jamaican immigrants,[5] his father a carpenter and his mother a housing manager. As a child he wanted to be an astronaut. He lives in London with his wife and their four children.[6]

This article uses material from the article Courtney Pine from the free encyclopedia Wikipedia and it is licensed under the GNU Free Documentation License.