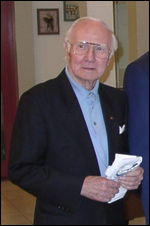 Erwin Lehn (8 June 1919, Grünstadt – 20 March 2010) was a German jazz composer, bandleader and musician. On 1 April 1951 he established the Südfunk dance orchestra of the South German Radio in Stuttgart, which he directed until 1992. With the start of a new public broadcasting corporation, the Südwestrundfunk, the name of the "Südfunk Tanzorchester" was changed to "SWR Big Band".

This article uses material from the article Erwin Lehn from the free encyclopedia Wikipedia and it is licensed under the GNU Free Documentation License.

Someone To Watch Over Me Coleman Hawkins
Update Required To play the media you will need to either update your browser to a recent version or update your Flash plugin.