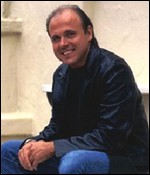 Walter Afanasieff (born Vladimir Nikitich Afanasiev; February 10, 1958),[1] formerly nicknamed Baby Love in the 1980s, is a musician, songwriter, record producer and composer. He is a Brazilian-American of Russian descent, known for his long association with Mariah Carey, for whom he was co-producer and co-writer for several years. He won the 1999 Grammy Award in the Record of the Year category for producing "My Heart Will Go On" by Celine Dion, and the 2000 Grammy Award for Producer of the Year, Non-Classical.[2]

Afanasieff was born Vladimir Nikitich Afanasiev[3] (Russian: Владимир Никитич Афанасьев) in São Paulo, SP, Brazil to Russian parents Nikita and Tatiana.[1] His father is from Leningrad and his mother is a Harbin Russian from China. His parents met in Brazil in the early 1950s.[4] Beneath the senior portrait in his high school yearbook, Afanasieff wrote that his goal was to "write and play better than Keith Emerson" of Emerson, Lake & Palmer.

Starting out as a working jazz musician in 1980, Afanasieff initially played keyboards with the jazz/fusion violinist Jean-Luc Ponty. Later, he formed The Warriors[5] with another former Ponty sideman, guitarist Joaquin Lievano, and with leading 1980s music producer/songwriter and drummer Narada Michael Walden, and these experiences gave him the background and confidence to take an active role as a producer.[6]

Walden hired Afanasieff as a staff producer/arranger and began using him as a keyboardist on a large number of recording projects, including Whitney Houston's self-titled debut album released in 1985, which went on to become the artist's best-selling studio album to date. It was also during this time that Afanasieff and Walden began writing pop songs together. Together with his mentor Narada, Afanasieff's first major production was the title track of the James Bond movie Licence to Kill, sung by Gladys Knight and co-written by Afanasieff and Walden.[7]

One of Afanasieff's biggest hits as a producer was the smash hit "My Heart Will Go On", the theme tune to the 1997 film Titanic, sung by Celine Dion.[2] The song became the world's best-selling single of 1998.[8] Afanasieff produced and arranged other successful motion picture soundtracks, including Disney's Beauty and the Beast (the Celine Dion/Peabo Bryson title-track duet), Aladdin ("A Whole New World") and The Hunchback of Notre Dame ("Someday").[2] Afanasieff was also the producer and arranger for "Go the Distance", the Oscar-nominated Michael Bolton song from the animated film Hercules.

Afanasieff performs on most of his recordings (mainly keyboards, synthesizers and drum programming).

Afanasieff spent a significant part of his career creating music with Mariah Carey from 1990 to 1998. He had a role in some of Carey's most successful songs, including "Hero", which he co-produced, co-wrote, and on which he played all of the music tracks. "Hero" was released as the second single from Carey's album Music Box, and reached number one on the Billboard Hot 100 chart on December 25, 1993. It remained at the top of the chart for four weeks. "Hero" has become one of Carey's signature songs, and Carey closes many of her concerts with it.[9] Carey and Afanasieff also wrote "One Sweet Day", a duet between Carey and Boyz II Men, which held the record for the longest run at number 1 on the Billboard Hot 100 (16 weeks) for 23 years; the record was matched in 2017 by Despacito, and broken by Old Town Road in 2019. The song was nominated for the 1996 Grammy Awards for Record of the Year and Best Pop Collaboration with Vocals, and received the ASCAP Song of the Year Award for 1996. In 1994, Carey released the Christmas song "All I Want for Christmas Is You". He and she produced and composed the song for Columbia Records. As of December 2018, the song has earned cumulative worldwide sales of over 14 million copies.

In 2009, Walter started working with Russian singer Yulia Nachalova. Their album Wild Butterfly was released in 2012 on iTunes. They later produced a video "Zhdi menya" (Wait for me) in Russian, released on iTunes in 2015.

In 2014 Walter became head of the composers/producers department at Isina, a worldwide talent search and development mentorship for those seeking to pursue a career in music.[10][11][12]

In 2015 he became one of the mentors of the Russian TV project Glavnaya Stsena ("Main Stage"), the Russian version of The X Factor.

This article uses material from the article Walter Afanasieff from the free encyclopedia Wikipedia and it is licensed under the GNU Free Documentation License.