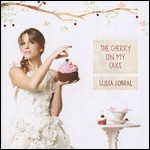 She came to prominence in 2003 after placing third on season one of Ídolos, the Portuguese version of Idols. After going on a hiatus to attend the Berklee College of Music, she released her debut album, The Cherry on My Cake, in 2011. She later composed "Amar pelos dois", which won the Eurovision Song Contest 2017 for Portugal, performed by her brother Salvador Sobral.[1]

Luísa Sobral was born and raised in Lisbon, and also lived in the United States for a period of time as a child. Her younger brother is Salvador Sobral, who is also a singer. Through her father, she is related to Hermano José Braamcamp de Almeida Castelo Branco, a 19th-century Portuguese nobleman and politician of Italian and Dutch descent.

In 2003, at the age of 16, Sobral auditioned for season one of Ídolos, the Portuguese version of Idols. She eventually placed third in the competition. After Ídolos, Sobral went on a hiatus from music in order to focus on her education. She moved to the United States to study music at the Berklee College of Music in Boston, graduating in 2009.[2] Her move to the United States, made her compositions more distinct, a mixture between Portuguese, Brazilian, French and North American musical traditions, reflecting her musical influences in her classic soft-spoken singing style.

Luísa Sobral returned to the music industry in 2011, releasing her debut studio album, The Cherry on My Cake.[3] The album peaked at No.3 on the Portuguese albums chart.[4] In 2012, she became the third Portuguese artist to perform with Jools Holland, performing with Melody Gardot. She later went on tour with Gardot.[5] Her second studio album, There's a Flower in My Bedroom, was released in 2013, and her third, Lu-Pu-I-Pi-Sa-Pa, the following year.

In 2016, Sobral released her fourth studio album, Luísa. Recorded in Los Angeles, at the United Recording Studios, the album sets a new plateau for Luísa's song writing and song production. With the input of Grammy award winner producer Joe Henry and musicians like Greg Leisz, Luísa is a clear and mature departure from her previous works.

The same year, she composed and wrote the lyrics to the song "Amar pelos dois" for Portuguese national broadcaster RTP1's Festival da Canção 2017. At the invitation of the broadcaster, in need to change the Portuguese's public perspective on the Festival, in which Portugal had never gone past 6th place, Luísa and Salvador Sobral represented, among other contestants, the new breed of talented Portuguese artists that are unknown outside of Portugal.

"Amar pelos dois", a bossa-nova inspired jazz ballad composed by Luísa Sobral, with lyrics in Portuguese and sparse minimalistic string arrangement, done by Portuguese composer Luis Figueiredo, was sung by her younger brother, Salvador Sobral.[6] It clearly won Festival da Canção, and was thus chosen to represent Portugal in the Eurovision Song Contest 2017.[7] Because Portugal is not included as the Big 5 countries (France, Germany, Italy, Spain, United Kingdom) that are able to reach the final without taking part on the semi-finals, the song had to go through the semi-final stage before reaching the final. During that time, Luísa and Salvador Sobral started getting a full understanding that the song, unknown to the Eurovision public and news reporters just a few months ago, had risen to the top of betting agencies polls, beating clear favourites and crowdpleasers, like Francesco Gabbani's "Occidentali's Karma".

During initial rehearsals for the contest in Kiev, Luísa had to stand in for Salvador as a performer, due to his health issues. During the final on 13 May 2017, the song was declared the winner, becoming the first-ever win for Portugal, and the all-time record-holder for the most points received by a song in the final.[8] Luísa performed the song with Salvador during his winner's encore performance, like she did after he won Festival da Canção 2017.[9]

The song and the winning performance in Kiev made Luísa and Salvador Sobral household names overnight in Portugal, being received like heroes by hundreds of fans upon their arrival at Lisbon Airport after the final.

Luisa Sobral announced her pregnancy in January 2016, although she did not reveal who the father of the child was.[10] Her son was born in 2016.[11] In December 2017, she announced that she was pregnant with her second child.[12]

She is the sister of Salvador Sobral. She composed the song Amar pelos dois for Salvador, which was the winning song of the 2017 Eurovision Song Contest. After he won, they performed the song as a duet.

This article uses material from the article Luísa Sobral from the free encyclopedia Wikipedia and it is licensed under the GNU Free Documentation License.

Move Art Pepper Quintet
Update Required To play the media you will need to either update your browser to a recent version or update your Flash plugin.