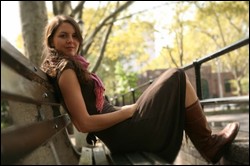 born in in Maine, United States

Heather Masse is an American alto singer and member of the Canadian folk trio The Wailin' Jennys. She was born and grew up in Maine, and studied at the New England Conservatory of Music as a jazz singer. She is currently based in New York City.

Masse joined The Wailin' Jennys in 2007. She released her first solo album, Bird Song, in 2009.[1] She has appeared regularly on the American Public Media program, A Prairie Home Companion,[2] and is also a featured vocalist on the 2010 album Found Alive by Noam Weinstein.[3]

This article uses material from the article Heather Masse from the free encyclopedia Wikipedia and it is licensed under the GNU Free Documentation License.