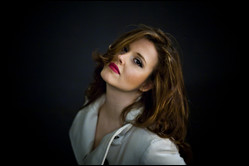 Halie Loren (born October 23, 1984) is an American singer and songwriter. Her 2008 CD They Oughta Write a Song won the 2009 Just Plain Folks award for Best Vocal Jazz Album[1] and subsequently received international distribution and acclaim,[2] becoming the No. 2-selling jazz album in Japan for 2010.[3] Her most recent album, Heart First, won Jazz Critique Magazine's Golden (top) prize in the vocal album section of Jazz Audio Disc Awards 2011,[4] reached No. 1 on the iTunes Canada jazz albums chart,[5] and rose to No. 2 in jazz CDs at Amazon Canada. Her latest album, Simply Love, was released in Japan on June 19, 2013, and that week entered Billboard Japan's Top Jazz Albums chart at No. 2.[6] It will be released in North America on September 10, 2013.

Much of her early life was spent in Alaska, where she made her performing debut at the age of 10 at the Sitka Fine Arts Camp. At 13 she moved with her family to Oregon.[7]

She won songwriting awards in the John Lennon Songwriting Contest and Billboard World Song Contest, and also won the Female Rising Star and Alternative Entertainer awards while still in her teens.[8] In 2000, Halie earned first place in the Austin Songwriters' Contest for three of her songs in the Country, Singer/Songwriter, and Jazz categories.[9] At 17, Halie moved to Nashville to further pursue songwriting and industry experience. She spent the next year and a half there writing, recording, and performing before returning to the Northwest to continue her education.[10]

In 2005 and 2006, she won consecutive first place honors in the Pacific Songwriting Competition, first in the Country category for "What We're Fighting For," and the following year for "A Tree Falls" in the Spiritual/Inspirational category.[11]

Her first solo album, Full Circle, was released in summer 2006, featuring Halie's original songs on all but one track. Uniquely, the album features her piano playing as well as vocals throughout. The album's co-producer, James M. House of Squank Entertainment, also played much of the guitar and bass on the album.

In 2008 she concurrently recorded and independently released two albums, They Oughta Write a Song and Many Times, Many Ways: A Holiday Collection. The former featured three original songs by Halie as well as ten other jazz and popular standards. It debuted at No. 3 on the Billboard Japan Top Jazz Albums chart, and went on to spend 33 weeks in the Top 20.[12] Critical reception was generally positive. "They Oughta Write a Song hits all the right notes from start to finish," reported Wildy's World. "... Loren's silky alto slides through the songs here like a hot knife through butter."[13] DailyOM found her "reminiscent of a Columbia-era Frank Sinatra, both in her beyond-her-years maturity, (seemingly) effortless musical charm, and sense of lived-in story telling."[14] "With her bell-clear voice, careful but natural diction and a subtle sexiness in her delivery, she offers a new and perhaps less drug-hazed take on Procol Harum's "A Whiter Shade of Pale," wrote Serena Markstrom in The Register-Guard.[15] A video of her live performance of the song has been viewed more than 25,000 times on YouTube as of December 2012.[16]

Stages, her first live CD, was recorded in 2009 at two concerts on the Oregon Coast and released in March 2010. CD Baby selected it as an Editor's Pick in October 2010, writing that "Her respect for the past is undeniable, while her finger on the pulse of modern music gives her songs a wide appeal that reaches far beyond jazz clubs."[17] Wildy's World included Stages in its top 60 albums of 2010, calling it the "best live album of the year."[18]

Her recordings are distributed by Justin Time Records [19] and Burnside Distribution Corporation.[9] In Japan and surrounding Asian markets, her recordings are licensed and distributed by JVC/Victor Entertainment,[20] which released a deluxe edition of They Oughta Write a Song featuring four bonus live tracks from Stages to the Japanese market in May 2010. They Oughta Write a Song went on to become the No. 4-selling jazz album at Amazon Japan in 2010.[21] More than 20,000 Loren CDs on the JVC/Victor label had been sold in Japan as of December 2010.[22]

Halie's next album, After Dark, debuted in Japan on October 22, 2010, coinciding with the 6th annual Ginza Jazz Festival, at which she was a featured performer.[23] It was released in the U.S. on Nov. 16, 2010, and was immediately selected as a Wildys World Certified Desert Island Disc: "With a masterful voice thats part Etta James and part Sarah McLachlan, a subtle touch that allows her to blend vulnerability and sensuality unlike any other artist currently in jazz or pop music, and a talent for phrasing thats uncanny, Halie Loren is the complete package. ... [T]here will be little doubt to those in the know that After Dark is one of the finest vocal jazz albums of 2010."[24] Wildy's World also selected After Dark as one of its top three indie albums of the year,[25] and Halie herself as Artist of the Year for 2010.[26]

"Whether somber or seductive, sedated or energetic, Lorens varied and in all ways successful efforts make you stop and take notice," wrote reviewer Brian Palmer for Stereo Subversion, giving the album 8.5 out of 10 points. "After Dark is a shimmering record for those who love female singers who can bring the playfulness, pizazz, vulnerability and sensuality to the songs they perform."[27] Another reviewer praised her "strong but vulnerable, feminine but forceful, playful but serious[,] and sexy but reserved voice."[28] In a review of the album, Vivoscene called her "one of the finest young jazz singers of her generation," noting that "[s]he has both an exquisite musical sense and the talent for phrasing that makes a song come alive."[29]

"Thirsty", one of two Loren originals on After Dark, appeared on the Billboard Japan Hot 100 chart,[30] was nominated in January 2011 for the 10th Annual Independent Music Awards in the Best Jazz Song category,[31] and in July 2011 won the listener-determined IMA Vox Pop poll for best jazz song.[32]

In July 2011, "Sisters Song" from Full Circle was chosen by the nonprofit Until There's A Cure Foundation for their "Save Our Sisters" campaign dedicated to women affected by HIV/AIDS worldwide.[33]

JazzTimes reviewer Christopher Loudon, noting her "chameleonic vocal skills," found that the album had "generated plenty of buzz about her emergence as the next big thing among jazz vocalists."[37]

"Lorens ability to find something new in the old makes this a fun ride. She finds the middle ground between Bob Marleys impassioned delivery and Annie Lennoxs pop sheen on Waiting In Vain, strips Sway (Quién Será) to its seductive core, and removes any hint of Eartha Kitt from Cest Si Bon, wrote Dan Bilawsky on All About Jazz. " It all comes together to perfection. Depending on the song, Loren can be sweet, sly, or sultry, but she always finds the right read."[38] "Alternately sexy and smooth, sultry and wry, Ms. Loren uses her not inconsiderable gifts well," wrote Brian Arsenault in The International Review of Music.[39] "Heart First is an eclectic yet personal release that sidesteps some of the more self-limiting categories induced by the recording industry in favor of a far more organic approach as a story teller," reported @Critical Jazz in a 5-star review.[40]

"In Time," one of four original songs on Heart First, was initially released as a digital single to benefit the Japanese Red Cross in the wake of the earthquake and tsunami of 2011 that devastated Japan. It was later remixed for the album, and features Loren accompanying herself on piano.[41]

This article uses material from the article Halie Loren from the free encyclopedia Wikipedia and it is licensed under the GNU Free Documentation License.