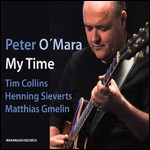 He studied at the Academy of Guitar under George Golla, at the Sydney Conservatorium of Music and at jazz clinics under Jamey Aebersold, Dave Liebman, Randy Brecker, John Scofield and Hal Galper.

O'Mara began his professional career in Australia between 1976-81. He was a Prizewinner for Jazz Composition 1980 & 1982, awarded by the NSW Jazz Action Society. His first album "Peter O´Mara" was released 1980, receiving widespread critical acclaim. He was awarded the "Don Banks Memorial Fellowship" for overseas study. 1981 he was studying in New York under Dave Liebman, John Scofield, Roland Hanna, Jimmy Raney and Attila Zoller.

O'Mara moved to Munich, Germany in late 1981. He joined Klaus Doldinger's band Passport in 1990 and has toured Europe a number of times with this group, as well as South Africa and Brazil.

His teaching activities include, among many workshops throughout Europe, a professorship for Jazz guitar at the Anton Bruckner Private University for Music, Drama, and Dance Austria, as well as the University of Music and Performing Arts Munich. He is also author of four highly acclaimed books published by internationally renowned Jazz publishers Advance Music.

Musicians that O'Mara worked with

This article uses material from the article Peter O'Mara from the free encyclopedia Wikipedia and it is licensed under the GNU Free Documentation License.

Lullaby of Birdland Lisette Spinnler
Update Required To play the media you will need to either update your browser to a recent version or update your Flash plugin.