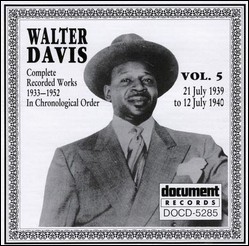 Davis had a rich singing voice that was as expressive as the best of the Delta blues vocalists. His best-known recording, a version of the train blues standard "Sunnyland Blues", which he released in 1931, is more notable for the warmth and poignancy of his singing than for his piano playing.[3] Two more of his best known songs were "Ashes In My Whiskey" and "Blue Blues".[2]

Davis was born on a farm in Grenada, Mississippi, United States,[2][4] and ran away from home at about 13 years of age, landing in St. Louis, Missouri. During the period from the late 1920s through the early 1950s he played club dates in the South and the lower Midwest, often with guitarist Henry Townsend and fellow pianist Peetie Wheatstraw, and recorded prolifically. He was accompanied by Roosevelt Sykes on his first recordings (193033).[5]

He recorded around 180 singles between 1930 and 1952. Some of his material has been covered by other performers.[5]

Davis appears to have stopped performing professionally around 1953. Suffering from health problems, primarily a stroke, he settled in St. Louis, Missouri, supporting himself as a night clerk at a hotel and as a preacher.[6] He died in St. Louis in 1963, aged 52.[6]

He was posthumously inducted into the Blues Hall of Fame in 2005.

In October 2012 the Killer Blues Headstone Project, a nonprofit organization, placed a headstone on Davis's unmarked grave at Greenwood Cemetery in Hillsdale, Missouri. The stone was unveiled at the 2012 Big Muddy Blues Festival in St. Louis, Missouri.

Davis is no relation to the jazz pianist, Walter Davis, Jr.

This article uses material from the article Walter Davis (blues) from the free encyclopedia Wikipedia and it is licensed under the GNU Free Documentation License.

Why Did You Tell Me "I Love You" Rossano Sportiello & Guillaume Nouaux
Update Required To play the media you will need to either update your browser to a recent version or update your Flash plugin.