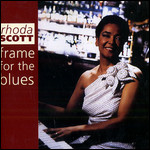 The daughter of an African Methodist Episcopal (AME) minister, Scott spent much of her childhood in New Jersey, where she learned to play organ in the churches where her father served. Soon she was organist for youth and gospel choirs. Scott later studied classical piano, but she concentrated on the organ, eventually earning a Master's degree in music theory from the Manhattan School of Music.

Scott was first attracted to the organ in her father’s church at age seven. "It's really the most beautiful instrument in the world", she stated in a recent interview. "The first thing I did was take my shoes off and work the pedals."[1] From then on she always played her church organ in her bare feet, and to this date she has continued the practice.[2]

In 1967 Scott moved to France, where she has since spent most of her career.

This article uses material from the article Rhoda Scott from the free encyclopedia Wikipedia and it is licensed under the GNU Free Documentation License.

Fields Of Gold Rachel Z
Update Required To play the media you will need to either update your browser to a recent version or update your Flash plugin.