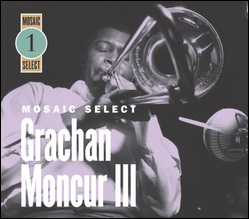 Born in New York City (his father's father was from the Bahamas)[1] and raised in Newark, New Jersey, Grachan Moncur III began playing the cello at the age of nine, and switched to the trombone when he was 11.[1] In high school he attended the Laurinburg Institute in North Carolina, the private school where Dizzy Gillespie had studied. While still at school he began sitting in with touring jazz musicians on their way through town, including Art Blakey and Jackie McLean, with whom he formed a lasting friendship.

After high school Moncur toured with Ray Charles (1959–62), Art Farmer and Benny Golson's Jazztet (1962), and Sonny Rollins. He took part in two classic Jackie McLean albums in the early 1960s, One Step Beyond and Destination... Out!, to which he also contributed the bulk of compositions and which led to two influential albums of his own for Blue Note Records, Evolution (1963) with Jackie McLean and Lee Morgan, and Some Other Stuff (1964) with Herbie Hancock and Wayne Shorter.

Moncur joined Archie Shepp's ensemble and recorded with other avant-garde players such as Marion Brown, Beaver Harris and Roswell Rudd (the other big name in American free jazz trombone). During a stay in Paris in the summer of 1969, he recorded two albums as a leader for the famous BYG Actuel label, New Africa and Aco Dei de Madrugada, as well as appearing as a sideman on numerous other releases of the label. In 1974, the Jazz Composer's Orchestra commissioned him to write Echoes of Prayer (1974), a jazz symphony featuring a full orchestra plus vocalists and jazz soloists. His sixth album as a leader, Shadows (1977) was released only in Japan. Unfortunately, he was subsequently plagued by health problems and copyright disputes and recorded only rarely. Through the 1980s he recorded with Cassandra Wilson (1985), played occasionally with the Paris Reunion Band and Frank Lowe, appeared on John Patton's Soul Connection (1983), but mostly concentrated on teaching. In 2004 he re-emerged with a new album (Exploration) on Capri Records featuring Grachan's compositions arranged by Mark Masters for an octet including Tim Hagans and Gary Bartz.

with The Reunion Legacy Band:

with Roswell Rudd and Archie Shepp:

This article uses material from the article Grachan Moncur III from the free encyclopedia Wikipedia and it is licensed under the GNU Free Documentation License.

Home Dino Saluzzi
Update Required To play the media you will need to either update your browser to a recent version or update your Flash plugin.