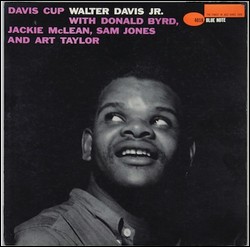 Born in Richmond, Virginia, Davis performed as a teenager with Babs Gonzales. In the 1950s, Davis recorded with Melba Liston, Max Roach and played with Roach, Charlie Parker and Dizzy Gillespie. In 1958 he played a highly successful, extended engagement in Paris with trumpeter Donald Byrd at Le Chat Qui Peche and shortly after realized his dream of becoming pianist and composer-arranger for Art Blakey's Jazz Messengers.

After retiring from music in the 1960s to work as a tailor, painter and designer, he returned in the 1970s to perform with Sonny Rollins and again with the Jazz Messengers. He recorded with many other prominent jazz musicians, including Kenny Clarke, Sonny Criss, Jackie McLean, Pierre Michelot and Archie Shepp.

Davis was known as a prime interpreter of the music of Bud Powell,[1] but also recorded an album capturing the compositional genius and piano style of Thelonious Monk. Although few of Davis' recordings as a pianist remain in print, he is likely to be periodically rediscovered and long remembered for his strikingly original, adventurous and challenging compositions, several of which served as titles for noteworthy albums by Art Blakey's Jazz Messengers. Combining traditional harmonies with modal patterns and featuring numerous rhythmic shifts along with internal melodic motifs within operatic, aria-like sweeping melodies, Davis's fresh and forward-looking compositions included "Scorpio Rising", "Backgammon", "Uranus", "Gypsy Folk Tales", "Jodi" and "Ronnie Is a Dynamite Lady".

Davis had an occasional role as the piano player on the CBS television comedy Frank's Place. He also contributed to the soundtrack of the Clint Eastwood film Bird.

Davis died in New York on June 2, 1990, from complications of liver and kidney disease. He was 57. He was survived by four daughters, Evin Yager, Alana Davis, Sareenah Davis and Alicia Davis.

This article uses material from the article Walter Davis, Jr. from the free encyclopedia Wikipedia and it is licensed under the GNU Free Documentation License.

Realize It Dellatorre
Update Required To play the media you will need to either update your browser to a recent version or update your Flash plugin.