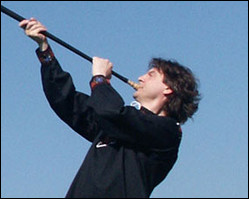 Arkady Shilkloper (born October 17, 1956) is a Russian multi-instrumentalist (horn, alphorn, flugelhorn, vogelhorn, ELEPHANT-Horn, corno da caccia, corno pastoriccio, didgeridoo) and composer, currently living in Germany. He is also known as one of the best jazz performers on horn[1] and alphorn[2] in the world.

Shilkloper was born in Moscow and started playing alto horn at the age of six.[3] and switched to horn in 1967. At the age of eleven he entered the Moscow Military Music School. After two years of military service (1974 - 1976) he studied at the Moscow Gnessin Institute (Gnessin Russian Academy of Music) from 1976 to 1981. At the same time he began his career in the orchestra of the Bolshoi Theatre (1978 - 1985) and also began his first jazz activities.

"Horncall", 1988, by Jeffrey Agrell (Professor of Horn at the University of Iowa School of Music)

“Shilkloper and his bass player swing like nobody’s business. He rips and riffs and goes places that horn players aren’t supposed to go without a net, map, seat belt, crash helmet, overhead air support, and a note from their mothers. And he does so with extraordinary ease and musicality. I think maybe nobody ever told him ‘Jazz playing on horn is very difficult, and probably not natural or perhaps the phrase does not translate into Russian.’ I’d walk a camel a mile to hear this guy.”[4]

At the same period he was a member of the Moscow Philharmonic Orchestra.

Since 1986 he collaborates with pianist Mikhail Alperin. Their first album "Wave of Sorrow" (1990) was the first Russian album on ECM. Later Shilkloper participated in three more Alperin recordings for ECM: «North Story» (1997), «First Impression» (1999) and «Her First Dance» (2008).

The «First Impression» was recorded in December 1997 at Rainbow Studio, Oslo. Tyran Grillo wrote in his review: "Ukrainian pianist and composer Misha Alperin joins forces for the first time in session with British reedist John Surman (a last-minute replacement for Tore Brunborg) in this melodious, spontaneous set. Augmented by Arkady Shilkloper on horn and flugelhorn, Terje Gewelt on bass, and Jon Christensen on drums, their hypnotic nexus breathes ounces of thematic life into the “Overture” in watery, stepwise motion. Surman’s reptilian soprano takes us in some unexpected directions throughout a holistic introduction, while his unmistakable baritone threads resilient cables through “Twilight house” and “City Dance.” The first of these is where the session truly comes to life through his interactions with Alperin, while the latter serves a touch of groove in a veritable trill buffet (think Snakeoil). “Movement” features classical percussionist Hans-Kristian Kjos Sørensen (heard previously on No Birch) in a spindly improv, the pointillism and melancholy draw of which only thinly veil its composed undercurrent. A lovely solo from Shilkloper on horn rises like a paper lantern lit and offered to the sky. Yet these are but the roofing to the album’s five “Impressions,” each a pillar in the dust."[5]

In 1990, the Alperin-Shilkloper duo invites Sergey Starostin, a Moscow Conservatory-educated clarinetist and a researcher of Russian authentic folklore music, which results in the creation of Moscow Art Trio. The trio tours regularly, though its members now live in three different countries; it is one of the most interesting and well-known Ethno Jazz groups from Russia. In Russia, their albums were released by Boheme Music; in Europe, by Jaro.

In 1990, Shilkloper visited US for the first time. According to Leonard Feather from the Los Angeles Times, "the Soviet horn virtuoso was one of four Jazzmen from the Soviet Union who arrived here last week to take part in the 23rd annual University of Idaho Jazz Festival at his home town's namesake city. Shilkloper, 33, on his first visit to the United States was the artistic sensation of the four-day event."[6]

Since 1998, Arkady also plays alphorn, quite an unusual instrument for improvised music. Arkady rates one of the best of the few existing jazz performers on alphorn. His "Pilatus", "Presente Para Moscou" and "Zum Gipfel und zurück" albums feature a lot of his alphorn playing.

In 2000, Arkady put together the Mauve Trio with Alegre Corrêa (guitar) and Georg Breinschmid (double bass). Their debut album "Mauve" (Quinton Records, 2002) was awarded the prestigious Hans Koller Prize of Austria as the "CD of the Year".

In 2004, he gave the first performance of the Concerto for Alphorn and Orchestra of Daniel Schnyder, a work commissioned by the Menuhin Festival in Gstaad.

In 2012, he started a collaboration with overtone singer Christian Zehnder and John Wolf Brennan

In 2015, Jazzahead presented his duet with the young Ukrainian jazz pianist Vadim Neselovskyi.[7][8]

Shilkloper has mastered extended techniques for both the horn and the alphorn. According to Leonard Feather, his control of the horn and his creativity have set a new standard.[9]

This article uses material from the article Arkady Shilkloper from the free encyclopedia Wikipedia and it is licensed under the GNU Free Documentation License.

Here's That Rainy Day Oliver Tabeling Trio
Update Required To play the media you will need to either update your browser to a recent version or update your Flash plugin.