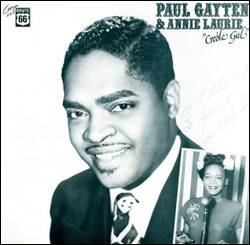 Gayten was born in Kentwood, Louisiana, the nephew of blues pianist Little Brother Montgomery.[2] In his teens he played piano in local bands while also setting up his own group, Paul Gayten's Sizzling Six, which featured future bebop saxophonist Teddy Edwards.

During the war, he led a band at the Army base in Biloxi, Mississippi.[1] He then moved to New Orleans and, with a new trio, established a residency at the Club Robin Hood. In 1947 the trio recorded two of the first New Orleans hits of the R&B era, "True (You Don't Love Me)", and "Since I Fell for You", the latter featuring singer Annie Laurie.[1] Both made the top ten in the US Billboard R&B chart. Gayten also backed singer Chubby Newsom on her hit single "Hip Shakin' Mama".[1]

In 1949, Gayten expanded his combo into a nine-piece orchestra and moved to Regal Records. There, Gayten wrote the number 1 R&B hit "For You My Love" for Larry Darnell,[2] and recorded "I'll Never Be Free" again with Annie Laurie.[1] His orchestra toured widely, for a period adding saxophonist Hank Mobley and singer Little Jimmy Scott, and appearing on double bills with both Dizzy Gillespie and Charlie Parker. In 1952 he moved to Okeh Records.

In 1956 he decided to quit as a touring bandleader and joined Chess Records as a talent scout, producer, promotion man, songwriter and part-time musician and recording artist.[2] He discovered Clarence "Frogman" Henry and produced his first hit, "Ain't Got No Home", in 1956, later going on to co-write and produce his biggest hit, "But I Do", in 1961. At Chess, Gayten produced Bobby Charles' "Later Alligator" and played piano on Chuck Berry’s "Carol". In 1956 he also had one of the biggest hits of his own career with "The Music Goes Round And Round", followed up by "Nervous Boogie".

In 1960 he moved to Los Angeles with his wife, Odile, to run the Chess operations there. In 1968 he set up his own label, Pzazz, which recorded Louis Jordan, among others. He continued to live in Los Angeles with Odile after retiring in the 1970s, and died there aged 71 in March 1991.[1]

This article uses material from the article Paul Gayten from the free encyclopedia Wikipedia and it is licensed under the GNU Free Documentation License.

A Smooth One Danny Moss meets Buddha's Gamblers
Update Required To play the media you will need to either update your browser to a recent version or update your Flash plugin.