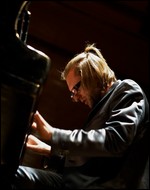 Możdżer started playing piano at the age of five, after being encouraged by his parents. In 1996 he graduated with honours from the Instrumental Faculty of the Academy of Music in Gdansk. He is a winner of many music and culture awards, including Ad Astra, Jazz Oscars, Jazz Forum Award, and Jazz Melomani Awards. He started in a band of clarinetist Emil Kowalski and later played with the band Miłość, which was very successful. He is famous for his "Impressions", subtle new interpretations of Chopin's compositions.

This article uses material from the article Leszek Mozdzer from the free encyclopedia Wikipedia and it is licensed under the GNU Free Documentation License.

Memories Of You Hazy Osterwald & The Swing Makers
Update Required To play the media you will need to either update your browser to a recent version or update your Flash plugin.